April 19, 2017 By Mark Smith
Share on FacebookShare on Twitter
You’re excited at the prospect of a day’s flying. Like a good pilot, you’ve planned well by reviewing weather, checked for relevant notams and have prepared a thorough flight plan....

You’re excited at the prospect of a day’s flying. Like a good pilot, you’ve planned well by reviewing weather, checked for relevant notams and have prepared a thorough flight plan. You’ve even had a think about emergencies and how you’d handle them.

You walk out to the aeroplane, load up, and commence the daily inspection. You’ve done it many times before. If you own the aeroplane you think you are familiar enough with her to basically kick the tyres and light the fires.

If you think that you are dead wrong.

It’s interesting and instructional to watch pilots daily their allotted aerial steed. Many amble around, wobble a control surface, drain a bit of fuel, and then saddle up. The whole process takes a matter of minutes.

Yet the daily inspection is the last line of defence against an unserviceability you probably don’t want to carry airborne.

Years ago at the Mangalore Airshow, CASA held a competition where a Piper Warrior was given 10 common faults a pilot should find during a daily inspection. Those who gave it a go weren’t told there were 10, just that there were some problems they should be able to find. The faults included obvious items such as a spanner in the engine bay, a leaking brake line and a deflated oleo, to subtle ones like a missing split pin on the elevator trim tab bolt. There was also a line relating to an AD on the maintenance release that would have effectively grounded the aircraft.

Pilots went at it with gusto, subjecting the airframe to what seemed to be an annual inspection. From memory only a couple of people found all 10, the average was around six. Many missed the spanner under the cowl and the leaking brake line. A lot also missed the MR entry.

The object of the exercise was twofold. It demonstrated how subtle actual faults can be, but more importantly it forced pilots to ask themselves a simple question: how long do I normally spend on a daily inspection?

In this case, knowing there were faults and that a prize was on offer, most spent 15 to 20 minutes going over the old Warrior. Yet when the prize was potentially their lives, many admitted to spending a quarter of that time checking out an aeroplane they were about to fly.

The other problem with the daily inspection comes from ab initio flying training. Students are taught the daily by their instructor, who was taught by his or her instructor. It becomes a routine, and as we know from other areas in aviation when things become routine, mistakes can be made and bad habits form.

With our aging aircraft fleet it’s every pilot’s responsibility to be on their game when it comes to the daily inspection. To perfect a flying technique you learn from an expert, therefore the best way to perfect your daily inspection is to learn from someone who spends their time looking for and finding faults – a licenced aircraft maintenance engineer.

A LAME is best equipped to point out the potential problem areas on any particular aeroplane you fly and can show you what something faulty actually looks like. As was demonstrated in the Mangalore competition, dangerous faults can be incredibly subtle and unless you know what one actually looks like, you may miss it.

It’s rare to see anyone using a torch when they perform a daily. The human eye isn’t the most efficient device in contrasty light, so extra brightness is needed when you are peering into a wing to properly inspect bellcranks attached to the ailerons. It’s the same with the engine bay on many aircraft. Cessnas give limited access to the engine during the daily, making it even more important to get a good view under the cowls via the front and underneath. A torch is vital to help with this.

Pipers are much better at allowing access to the engine, yet many pilots don’t lift the cowl before a flight. Why? There’s always a chance something came off during the last flight.

A good daily should take at least 10 minutes, and should be undertaken with the attitude that there is a fault and you intend to find it.

The first place to start is the maintenance release. Few pilots realise this is a legal document, and by signing it they accept certain legal responsibilities. The first thing to check is if the aircraft is within its annual date or time in service.

Next, check if there are there any airworthiness directives due. A tricky one is 101, the two-yearly pitot static check. At times this falls due between annual inspections so if it isn’t completed by a certain date the aeroplane is stuck on the ground. Another is the transponder check, AD Rad 47, amendment 2. This one will prevent you entering controlled airspace if it’s not up to date. Finally, is there anything a previous pilot who flew the aeroplane has written up?

Next step is to begin on the airframe. It doesn’t matter if you flew the aeroplane the day before or the week before. Treat every daily as if you and your passenger’s lives depend on it, because they do.

Students are usually taught to start at the pilot’s side flaps and work around the airframe clockwise, making sure every bolt has a split pin, there isn’t excessive play with the control surfaces, no rivets seem to be working loose, the pitot is clear, and the wheels and brakes are in good condition.

On low wing aeroplanes this means getting down on my knees to have a good look into and below the wings. If I’m flying a high wing aeroplane I make a point of getting up on a ladder and closely looking at the upper surface for any tell-tale signs of overstressing like wrinkling of the skins, especially near the wing root.

If you’re flying a Cessna the only inspection you can make of the engine bay is through the front. This is where your torch is vital. Have a good look, and a good sniff. If you have a fuel leak you just might pick it up.  Then look in from the bottom of the cowl. Grab the exhaust pipe and give it a good shake. It shouldn’t budge.

Checking the oil is incredibly important. How much should the aeroplane have? How much is in there? When is it due for an oil change?

It’s a slow, methodical process that, when done with care and attention to detail, allows a pilot to know they have done their best to keep flying safe for everyone involved. 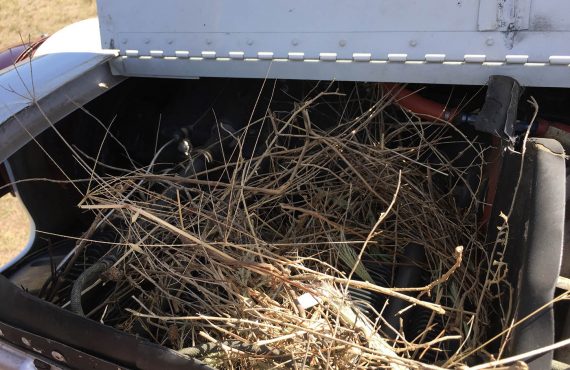 You’re excited at the prospect of a day’s flying. Like a good pilot, you’ve planned well by reviewing weather, checked for relevant notams and have prepared a thorough flight plan.

You’re excited at the prospect of a day’s flying. Like a good pilot, you’ve planned well by reviewing weather, checked for relevant notams and have prepared a thorough flight plan.