June 15, 2021 By Benjamin Morgan
Share on FacebookShare on Twitter
AOPA Australia leads joint industry response on safety concerns with the Tallawarra B open cycle gas turbine facility near Wollongong/Shellharbour Airport.
An open letter has been submitted to the NSW Minister for Planning, The Hon Rob Stokes, highlighting the aviation industry’s genuine concerns with the proposed Open Cycle Gas Turbine within the...

An open letter has been submitted to the NSW Minister for Planning, The Hon Rob Stokes, highlighting the aviation industry’s genuine concerns with the proposed Open Cycle Gas Turbine within the vicinity of Shellharbour Airport – calling for an independent assessment to protect aviation safety.

AOPA, RAAus, ASAC, and SAAA have signed a 22 page letter and submission to demonstrate both the seriousness and importance of this matter, encouraging the NSW Government to action the recommendations provided by the Civil Aviation Safety Authority to the NSW Department of Planning, Industry, and Environment.

“I would like to thank the SAAA, RAAus and ASAC for joining with AOPA Australia to work collectively in responding to this important issue, ” Benjamin Morgan, CEO AOPA Australia.

“The jointly signed letter demonstrates our industry’s genuine concerns for aviation safety and I am hopeful that Minister Stokes and the NSW Government will take appropriate action in supporting an open and transparent independent assessment, ” he said.

AOPA Australia and the co-signed representative bodies believe an independent assessment should be undertaken in an open and transparent manner to ensure the highest levels of aviation safety are maintained and stakeholder confidence is reinvigorated.

Our organisations collectively write to you to express our deep concern about the risk that the conditionally approved Tallawarra B project poses to the safety of aviation at Shellharbour Airport.

Energy Australia have been working towards building an Open Cycle Gas Turbine (OCGT) power plant at Tallawarra since 2010. One of the main complexities associated with this proposal is that it poses a risk to aviation safety at the Shellharbour airport.

The Civil Aviation Safety Authority (CASA) recommended modelling has shown that every OCGT unit studied in the period since 2010 would pose a significant risk to the safety of aviation. Energy Australia are now seek- ing full approval for an OCGT unit with the addition of a mechanical diffuser on the stack in order to reduce the impact to airport users.

The following is relevant in understanding the level of concern we collectively have regarding the risk this proposal might pose to the safety of aviation at Shellharbour Airport:

Under Civil Aviation Safety Regulation 139.180 (1)(b) CASA may determine in writing that a proposed object, such as an OCGT, may pose a hazard to aircraft operations.

Based on earlier CASA advice, Energy Australia needed to ensure that the Critical Plume Velocity (CPV) was no greater than 6.1m/s at 700ft. CASA has now advised your department on 29 March 2021 that they are unable to determine:

The unique nature of this new proposal is defined by proposing to build an OCGT in the vicinity of, and within the circuit of an aerodrome. As such, this calls for the use of engineering solutions to effectively control the vertical velocity of the plume to enable the CASA determined criteria of a CPV of 6.1m/s at 700ft to be met.

CASA’s existing guidance material on plume rise assessments does not consider the modelling required for this proposal as previous developments of this nature have not needed engineering controls to manage the vertical plume velocity as they were generally located sufficiently outside of the circuit area of an aerodrome.

Furthermore, should the project proceed, due to the possible significant risk to aviation, and the fact that this novel approach requires use of alternate modelling, we recommend that the plume characteristics be actual- ly measured as part of the commissioning process. We are aware of an independent international company competent to conduct such activity and are able to supply these details should you require them.

Our organisations are concerned that there is a very strong chance of a fatal accident occurring in the circuit of Shellharbour Airport should this project proceed without an appropriate independent assessment to en- sure to the best of our collective ability that the project does not pose a risk to the safety of aviation.

We commend the above actions to you. 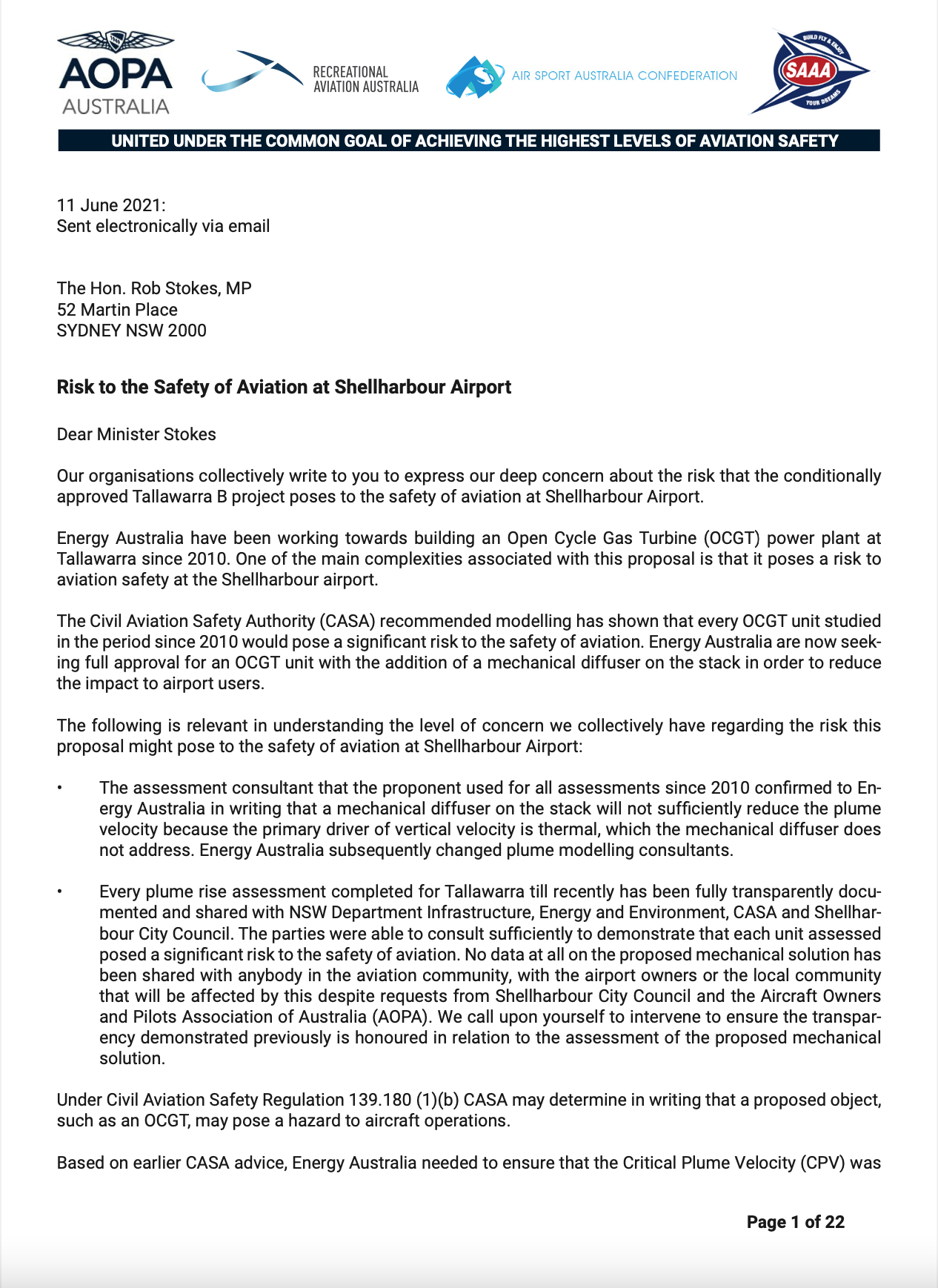 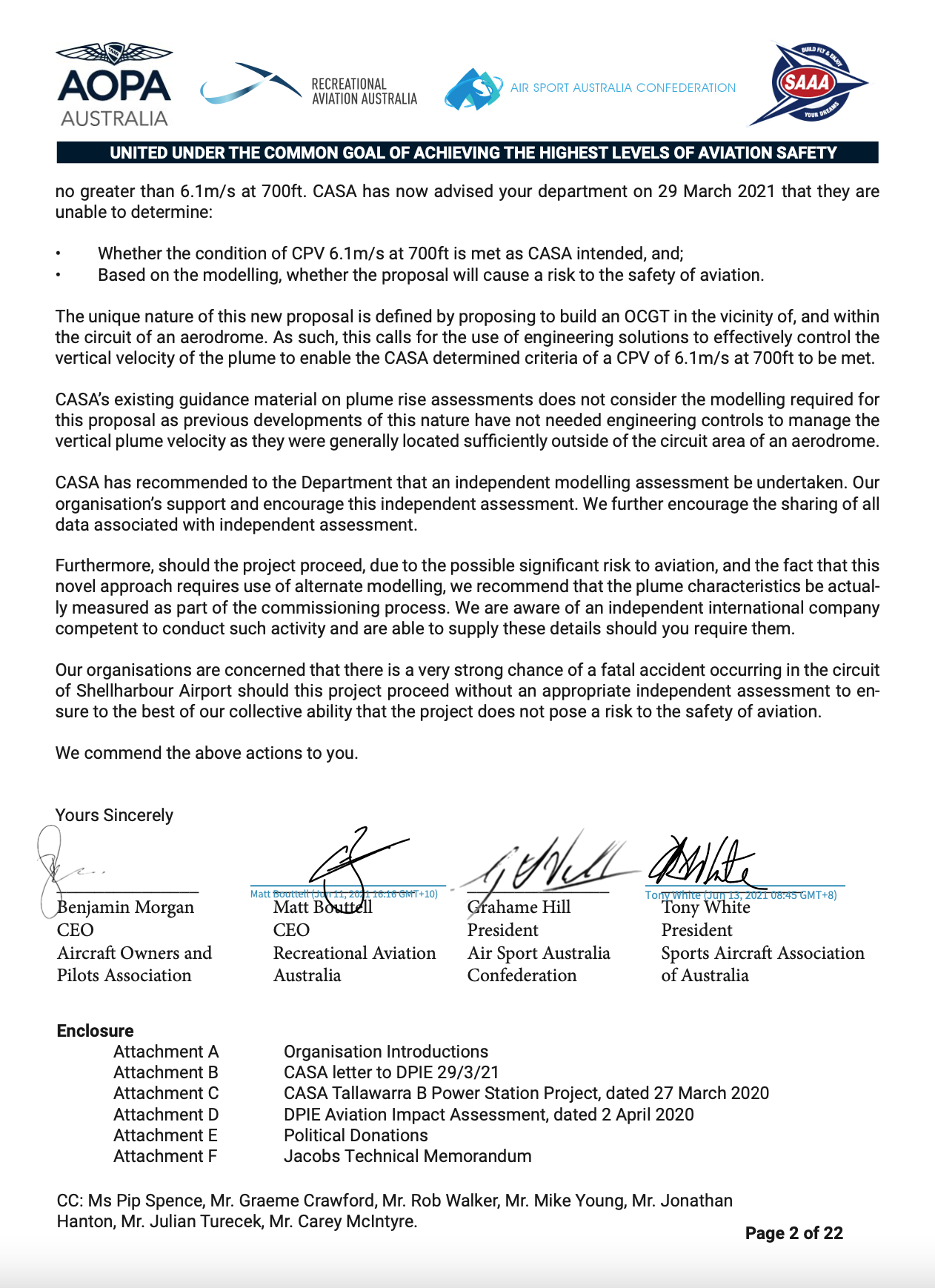