September 24, 2019 By Kreisha Ballantyne
Share on FacebookShare on Twitter
The Distinguished Gentleman's Ride unites classic and vintage style motorcycle riders all over the world to raise funds and awareness for prostate cancer research and men’s mental health. KREISHA BALLANTYNE caught up with founder Mark Hawwa
Sitting down with DGR’s founder Mark Hawwa, it takes very little time to discover the similarities between motorcyclists and aviators. Both activities a strong safety attitude; both inspire passion and... 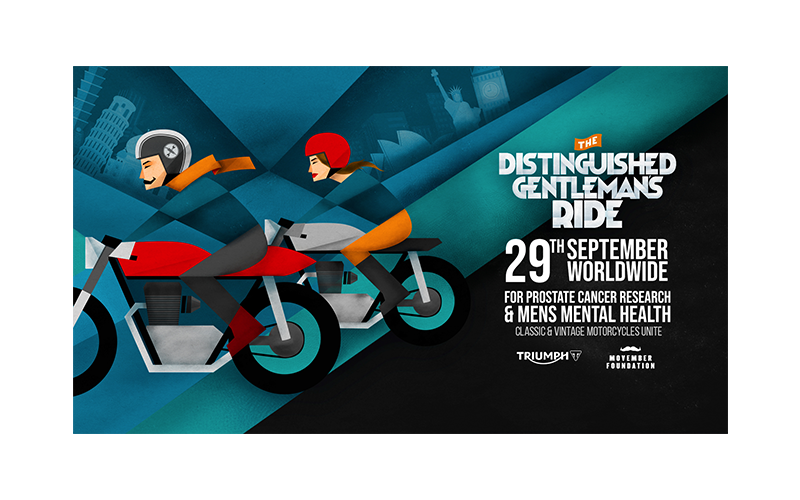 Sitting down with DGR’s founder Mark Hawwa, it takes very little time to discover the similarities between motorcyclists and aviators. Both activities a strong safety attitude; both inspire passion and dedication and both – that is riding and flying light aircraft – have a poor reputation with the general public.

“DGR is trying very hard to change public perception of motorbikes,” Mark tells me. “As well as raising awareness of men’s health issues, DGR aims to show the general public that motorcyclists are not only community minded, but fun, approachable and safe.”

The Distinguished Gentleman’s Ride was founded in Sydney in 2012. Inspired by a photo of TV Show Mad Men’s Don Draper astride a classic bike and wearing his finest suit, Mark decided a themed ride would be a great way of connecting niche motorcycle enthusiasts and communities while raising funds to support the men in our lives. Already the host of a motorcycle group called Sydney Cafe Racers, DGR grew out of the rides the group had enjoyed together.

“It took off so much faster than I expected,” Mark says. “From the first ride in 2012, there were 64 cities involved, with three thousand riders globally. It was inspiring to see motorcyclists from all over the world making an effort to dress in tweed jackets, vests, crisp shirts, stylish hats and polished brogues.”

“Our collective aim both at The Distinguished Gentleman’s Ride and the Movember Foundation is to be accountable and transparent,” says Mark. “We want the funds raised to have a genuine impact, and we want our noble gentlefolk to know where the funds that they have raised are going. Everything is disclosed on our website,” he says.

Over the years, DGR’s attention has broadened to include men’s mental health. In 2016, they partnered with the Movember Foundation, now the DGR’s official charity partner.

“Joining the Movember Foundation was influenced by the tragedy of losing one of our ride hosts to depression. We saw a change in our awareness and fundraising goals with a focus on men’s mental health programs. Since joining, I have been so encouraged by men having conversations about their health. When we started, I said, ‘If DGR can lead to one man getting a prostate check, or accessing a service for any aspect of men’s health, then we have succeeded.’ Since then, we have had endless feedback about how our ride brought men together in a space where they feel comfortable talking to others. Loneliness is an epidemic in modern society, and by bringing men together through the social aspect of riding, we are seeing them form smaller, special interest groups,” Mark says.

Like aviation, the world of motorcycles is largely male dominated; although, as in general aviation, things are changing. “Nothing gives me more joy than seeing female motorcyclists riding in the DGR. I don’t see how gender really has anything to do with being able to ride and DGR –  the ‘gentlemen’ in the title refers to the focus on male health, rather than the gender of the riders – is totally inclusive. Many of our volunteers, organisers and co-ordinators are female, and I think this is instrumental in changing the face of riding.”

As an L plater myself – and pillion rider in 2017’s DGR – I was thrilled by the camaraderie of the event, not unlike an airshow. Team AOPA (Ben Morgan, Richard Talbot, Brian Bigg and Kreisha Ballantyne) will be riding in this Sunday’s event. If you’re interested in joining us, please contact Ben.