October 13, 2020 By Benjamin Morgan
Share on FacebookShare on Twitter
Reported by the Sydney Morning Herlad's City Editor, Mr Matt O'Sullivan, October 12th, 2020.
The NSW Rural Fire Service faces an uphill battle to get two Black Hawk helicopters to fly firefighters to remote areas because it is deemed an unacceptable risk to safety.... 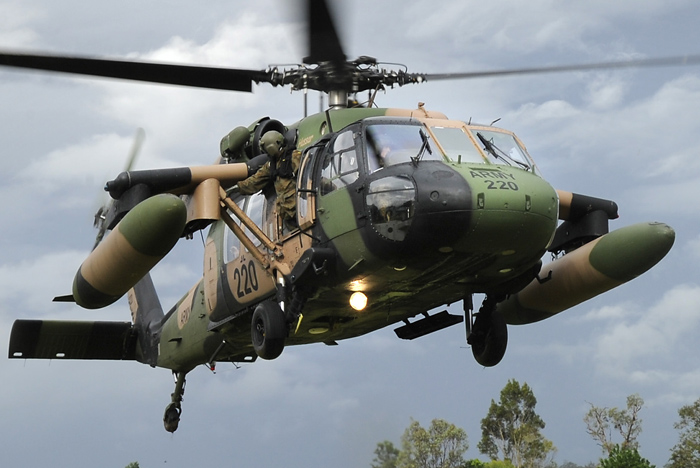 The NSW Rural Fire Service faces an uphill battle to get two Black Hawk helicopters to fly firefighters to remote areas because it is deemed an unacceptable risk to safety.

Two years after plans for the Defence Force to give two Black Hawks to NSW, emails between RFS commissioner Rob Rogers and air-safety regulators reveal the barriers to the helicopters being used to plug a gap in the agency’s operational capability.

Because the helicopters were designed for the military, there are restrictions under federal law on them being used to fly civilian passengers.

The first Black Hawk was originally due to be transferred to the RFS last year. But the delivery of both has been delayed until 2022, once they are decommissioned by Defence.

The RFS has instead decided to spend $6.5 million – which was originally committed to refitting the Black Hawks – on two Bell 412 helicopters, which will be operational this bushfire season.

Three months after plans for the Black Hawks were unveiled in June 2018, Mr Rogers, who was then deputy commissioner, emailed the Civil Aviation Safety Authority to confirm there were no “showstoppers” from a “regulation point of view”.

In a sign of his growing frustrations with the regulator later, Mr Rogers emailed CASA in February last year to say he needed to “understand we can work through the issues” before accepting a helicopter and committing NSW government funds.

“The key aim of these aircraft is to transport firefighters to areas to be on standby for lightning strikes,” he wrote. “As such, having the standard restricted-category aircraft certification is not much use to us, unless we are sure we can get past the ‘passenger’ issue.”

The emails and letters, released to Labor under freedom of information laws, show Mr Rogers requested further clarity from CASA in July last year so he could advise the NSW government “as to the viability of the gifted helicopters to meet our gap in operational capability”.

But in a letter to Mr Rogers in September last year, a senior CASA official said the body was of the view that the regulations did not permit a restricted category aircraft such as the Black Hawks being used to fly people from one location to another for ground firefighting.

“CASA considers the use of a restricted category helicopter in passenger-carrying operation creates an unacceptable risk to safety,” the CASA official wrote.

The senior official said aircraft designed to military specifications “traditionally did not cover areas such as passenger safety to the same extent as the civil standards”.

The RFS continues to face hurdles to using its flagship water bomber to transport firefighters this bushfire season. The Boeing 737 – named the Marie Bashir – has been fitted to ferry up to 72 firefighters but cannot do so because CASA is yet to give regulatory approval.

Labor emergency services spokeswoman Trish Doyle said bushfires would not wait for the NSW government to be prepared for the Black Hawks to be ready.

“This gap in our firefighting capability needs to be urgently filled,” she said. “This will ensure NSW not only has a capable aerial firefighting force, but that we are ready with the pilots, infrastructure and logistics to deploy the Black Hawks when they are eventually refitted for civilian use.”

But Emergency Services Minister David Elliott said the government had funded the purchase of the two Bell 412 helicopters, which had already enhanced the RFS’s operational capability.

“The NSW government will continue to support the NSW RFS as part of their discussions with [CASA] in relation to developing a public-usage category for the Black Hawk aircraft,” he said.

The RFS said it would keep working with CASA to develop a public-usage category for the Black Hawks, similar to that employed in the US, and was planning to take delivery of two helicopters from Defence in 2022.

Asked whether flying firefighters in the helicopters would create an unacceptable risk, the RFS said Black Hawks were used extensively, particularly in the US, to transport firefighters and equipment.

“The NSW RFS has and continues to maintain a stringent safety culture in line with industry best practice and does not believe the use of the Black Hawk aircraft poses any unacceptable risk to safety,” an RFS spokesman said.