But this Order is curious because it’s written exclusively for ‘RAAus’. And it specifically says so.

It refers to exemptions provided to certain types of aircraft (certain Ultralights), that:

Sounds reasonable, right? Perhaps. And that’s really what the ‘weight increase is about; an increase in the MTOW limit to a higher number than 600kg to open up the available aircraft types and release the full potential of other types.

The Order states that “An aircraft must be registered with RAA”.

The Order then goes on to define RAA as ‘Recreational Aviation Australia Limited, ARN 224806’. 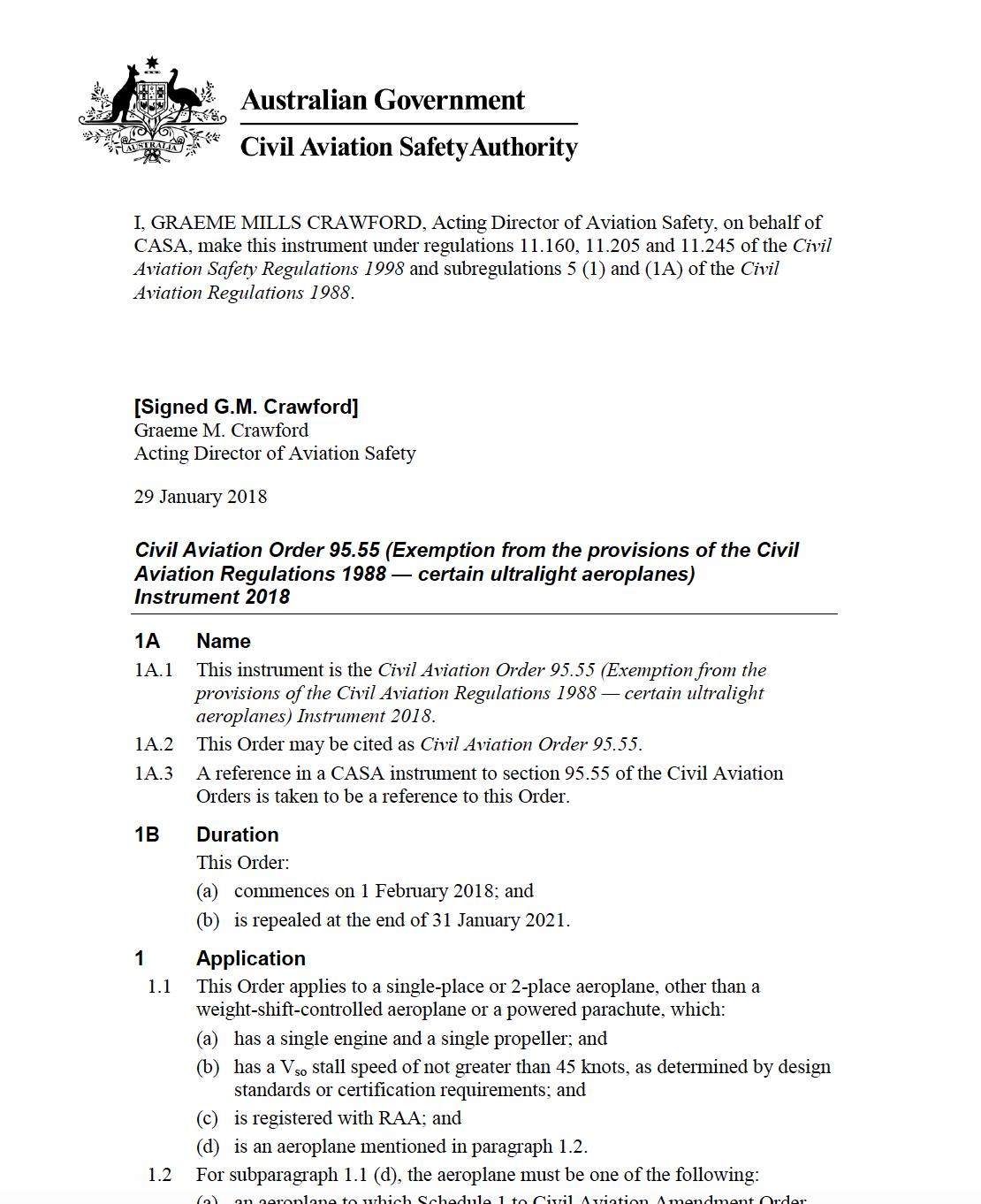 It’s in black and white. In other words, the Order is designed to apply only to the RAAus organisation and for their exclusive benefit and growth. It doesn’t reference any other organisation or provide for other organisations to join the competitive environment alongside RAAus. It flies in the face of Part 149 that relates to aircraft administered by other Self-Administering Aviation Organisations.

The increase in MTOW, once approved by CASA, would allow that organisation to increase its market share by offering paying members the opportunity to continue to enjoy their competitive advantage, in heavier aircraft. It’s curious – and peculiar in my opinion that CASA would legislate exclusively for SAO’s under Part 149 and then separately for RAAus.

I have written before that most agree that the weight increase is a good thing for the industry. But it must be accompanied by a levelling of the playing field, particularly in respect of training standards and medicals.

But this requires a legislative approach for the entire Recreational Aviation industry, not a CAO that deals with just one private member organisation.

All that aside, training is key here – and worth another mention. If RAAus MTOW goes up but training standards do not increase to reflect those of GA – (ie. the standards imposed on Part 141 flight schools and instructors) then it is likely that RAA trained pilots will have more accidents in heavier aircraft if they are not properly introduced to the skills required to fly those types.

Medical standards are largely irrelevant. The likelihood and consequences of a medical issue in a lighter or marginally heavier aircraft (dual occupant), is statistically the same. So self-declared medicals should be introduced for like-for-like aircraft across Recreational Aviation, irrespective of the paint on the tail, if the legislation is amended for an increased MTOW at RAAus.

What we really need to call out though – or at least seriously question – is why we find ourselves in the extraordinary situation where our Government Regulator is specifically drafting legislation that applies exclusively to benefitting and protecting the interests of a private member organisation, while turning a blind eye to benefiting our industry as a whole.