On a Wing and a Prayer: Insurance News

HomeAdvocacyCommunityOn a Wing and a Prayer: Insurance News

On a Wing and a Prayer: Insurance News

February 4, 2020 By Benjamin Morgan
Share on FacebookShare on Twitter
This article, by Benjamin Levy, first appeared in the December 2019/January 2020 edition of Insurance News.
If you see a light plane or helicopter flying overhead, there’s a good chance it’s uninsured. Here’s why. Insurance in the general aviation industry is in crisis.  Over recent months...

If you see a light plane or helicopter flying overhead, there’s a good chance it’s uninsured. Here’s why.

Insurance in the general aviation industry is in crisis.  Over recent months and years insurers AIG, Allianz and Swiss Re have announced the either won’t take on new customers, are raising their premiums or are withdrawing from general aviation insurance altogether.

The aviators blame a declining industry, and the insurers blame sloppy underwriting practices. They’re both right.

Speak to the general aviation industry and they’ll tell you that a perfect storm of problems has been brew­ing for some time, and the effects which are now start­ing to bite are hitting the insurers first.

Aircraft Owners and Pilots Association (AOPA Australia) Executive Director Benjamin Morgan points to a num­ber of different issues that are combining to put the future of the industry in jeopardy. They include overregulation, government imposts, hideously expensive aircraft and repair bills, a shrinking manufacturing base and less pilot experience.

Fifty years ago aircraft were reasonably priced, driven by a global critical mass volume of manufacturers and maintained by highly qualified technicians who were trained in World War II. The number of outlets capable of maintaining GA aircraft has halved in the past 15 years, and the cost of building them has skyrocketed to close to $1 million for an average new light aircraft.

Mr Morgan tells Insurance News that manufacturers have jacked up the cost of replacement parts to such high levels that insurers will now often write off the aircraft instead of repairing it.

The withdrawal of insurance coverage has been occurring for the past five years, and it’s getting to a point where premiums are borderline unsustainable. Some AOPA members are already flying uninsured because they can’t get policy renewals.

Mr Morgan blames the Civil Aviation and Safety Authority (CASA) for worsening things through overregulation. “Insurers are the canary in the coalmine,” he says. “When they start falling over, the politicians and CASA need to think hard, because they are driving this.”

Aviation broker and McKenzie Ross authorised representative Geoff Butler says some operators are seeing premium hikes of 200% on renewal. In one recent case he needed three underwriters to fill the slip, because no one insurer would cover the entire policy.

The situation is much worse for rotor-wing aircraft. Some 95% of helicopter accidents result in the aircraft being written off, “and there have been a lot of accidents recently”.

Now, Mr Butler tells Insurance News, the owners of fixed-wing aircraft are starting to hurt, too. Premiums have risen by 10%-12% in the first round of renewals, and between 10%-20% in the second round.

He agrees with Mr Morgan that the cost of repairs is an issue. “The cost of spare parts has been horrendous in the past couple of years, and the weak dollar has just exacerbated the problem.”

Until about two years ago, a $100,000 airplane could be repaired after an accident for about 50% of the sum insured. It’s now reaching 80%-90%, making it uneconomical for insurers. Aircraft made of composite materials rather than aluminium can cost upwards of $800,000.

Mr Butler also says overregulation is causing the industry to shrink and is also pushing up spare parts prices.

It didn’t help the situation when several hailstorms on the east coast badly damaged up to 150 aircraft, further prodding insurers to run for the hills.

Mr Morgan tells Insurance News that an accident with a new composite fixed wing aircraft typically involves a parachute deployment, and in the vast majority of such cases the plane will be written off by insurers. So insurers aren’t writing off a $60,000 or $100,000 repair bill, but a $1 million whole loss.

The cost comes down to the regulatory environment in which these parts can be manufactured, he says.

“There’s not a single part on a general aviation aircraft that you can’t just replicate. But the problem is that here, CASA has to approve you to manufacture that part, and the cost of approval is hundreds of thousands of dollars and takes several years.

“It’s a perfect storm that has been created for insurers.”

Not everyone agrees with this. Jamie Bowes, HDI Global’s Head of Aviation, says Australia is a benign flying environment and well-regulated, and is one of the most competitively priced places in the world to insure aircraft.

Brendan Warner, the Director of underwriting agency Catalyst Aviation Insurance, also says that manufacturing isn’t to blame for the current crisis. He says manufacturing costs are very specific to certain types of aircraft and can vary for a lot of different reasons, including the exchange rate.

Mr Bowes tells Insurance News that the market has suffered from years of unsustainable pricing driven by excess capacity, leading to poor results for the overall market.

“This has now ultimately resulted in a significant retraction in aviation capacity in the local market as companies look to address their underlying poor performance, and are being more selective…of their line exposures,” he says.

Mr Warner agrees. “There’s far too much capacity at the wrong premium.” He says one major insurer in particular “was willing to grow at premium rates that are just unsustainable, and that’s been going on for a while”.

He says underwriting agencies like Catalyst haven’t been chasing growth for the sake of growth. “We have the same capacity we’ve had for a number of years, but we haven’t been deploying it indiscriminately. Others have.”

The volatile helicopter insurance field is an example of under-pricing, he says. “We try to make sure the heli business doesn’t take up too much of our portfolio. We’re not willing to compete at the [prices being offered by some competitors].”

Not that aviation insurance pricing isn’t causing problems in other parts of the world. The companies contacted for this article all say this is a global phenomenon. Swiss Re Corporate Solutions is reducing its exposure globally, not just in Australia. So has AIG. The London market has suffered particularly badly, and a significant number of insurers have withdrawn from aviation classes.

Commercial aviation is being affected as well. A recent Allianz Global and Corporate Specialty report points out the increasing frequency and severity of claims on more expensive aircraft, as well as higher repair bills.

But those still in the market generally agree premiums have been unsustainably low for a number of years, and are now moving to more sustainable levels. And that has created an opportunity.

Executive Director Craig Davie says they are committed to delivering solutions in the shrinking domestic marketplace, and will help brokers find renewal policies.

HDI Global has also hired two senior underwriters with the aim of becoming a major aviation provider to the local market.

Catalyst’s Mr Warner says there is always a possibility for new entrants to come into the market, particularly if they do their underwriting properly

“It depends on how disciplined the current players in the market are at any given time,” he says. “Underwriting discipline is very hard to predict.”

Catalyst writes all kinds of aviation business for Lloyd’s, but only if the premium is deemed to be appropriate.

But this is cold comfort for Mr Morgan, who is questioning whether it’s even sustainable for some insurers to remain in the market.

“This industry has its arms tied behind its back through excessive regulation, and it’s killing it, and unfortunately the insurance companies are reflective of it,” he says.

But Mr Warner has little sympathy for such arguments. He says insurance isn’t compulsory for those who don’t want to pay.

Mr Butler says much the same thing. His clients, and the general aviation bodies, are up in arms over premium hikes, and he suggests that if you own your aircraft outright, have good experience and fly sensibly then self-insurance may be a good idea for the plane itself.

There’s no telling how bad this situation is going to get. AOPA believes the situation is at crisis point, if not past it, but for brokers and insurers there’s no end in sight.

The trend for now is ongoing premium increases because of accidents, lack of pilot experience and a reduction in insurance capacity.

“How long that will continue is very hard to say,” Mr Warner says. “Premiums are a very fluid situation at the moment.”

“It will hopefully ensure that over time profitability returns to the market, resulting in a more sustainable market for all concerned.” 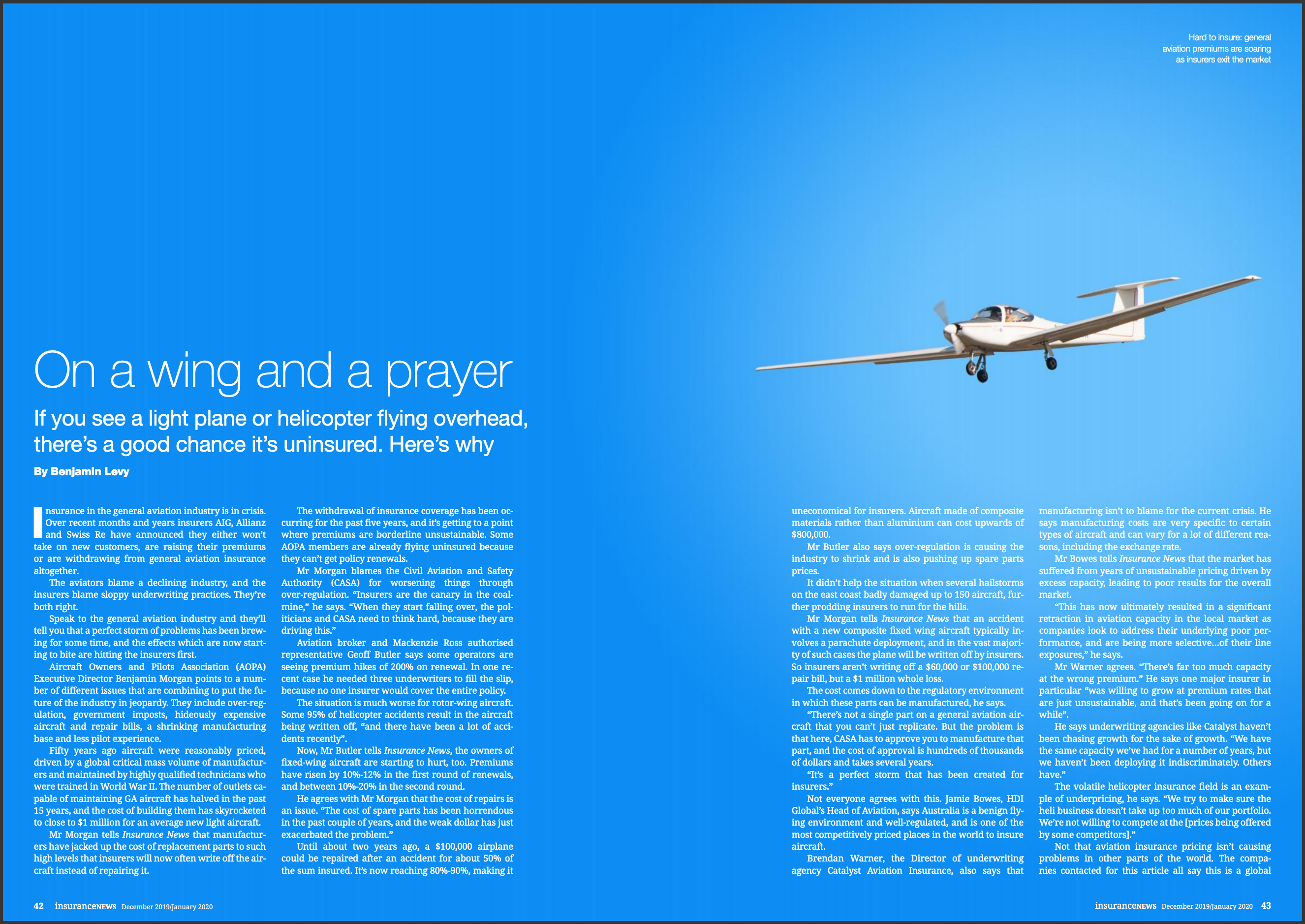 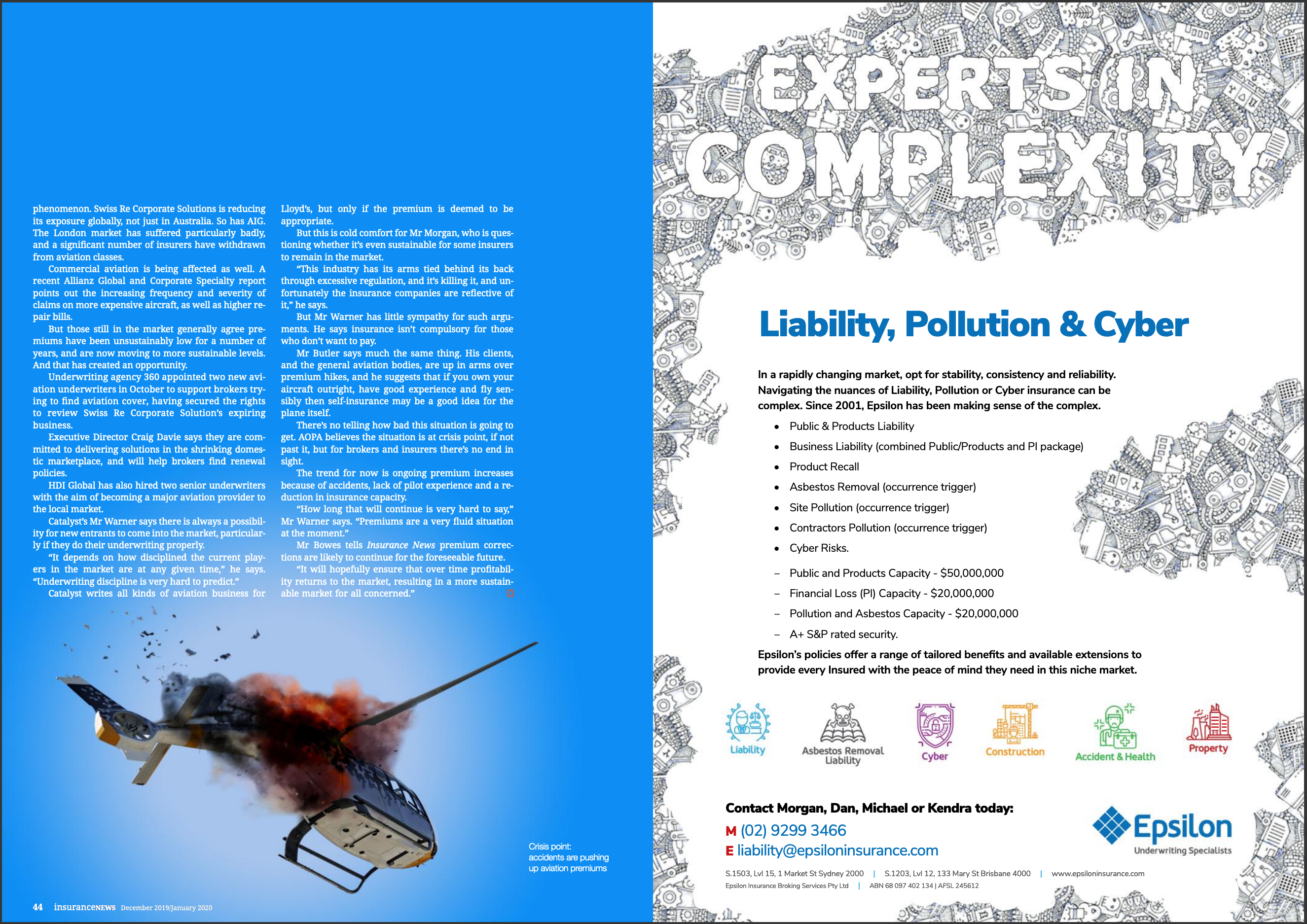