From the Archives: AOPA Magazine – March 1955

From the Archives: AOPA Magazine – March 1955

May 1, 2019 By AOPA Australia
Share on FacebookShare on Twitter
IN THIS NEW SERIES, WE DELVE DEEP INTO THE AOPA MAGAZINE ARCHIVES AND BRING YOU INTERESTING ARTICLES FROM AOPA's HISTORY
Welcome to the the first installment in a new series where each month we will bring you interesting features from the AOPA archives. This month we’ve dug up a few...

Welcome to the the first installment in a new series where each month we will bring you interesting features from the AOPA archives.

This month we’ve dug up a few articles from March 1955 AOPA magazine that prove the more things change – the more they stay the same.

Firstly, AOPA members will be interested in the editorial that reports on the assistance members gave to people in the NSW bush affected by severe flooding.

Several AOPA members volunteered the use of their aircraft and their own services completely free of charge, they were happy to know they were doing something to help those unfortunate people with the prospect of little or no reward at all. 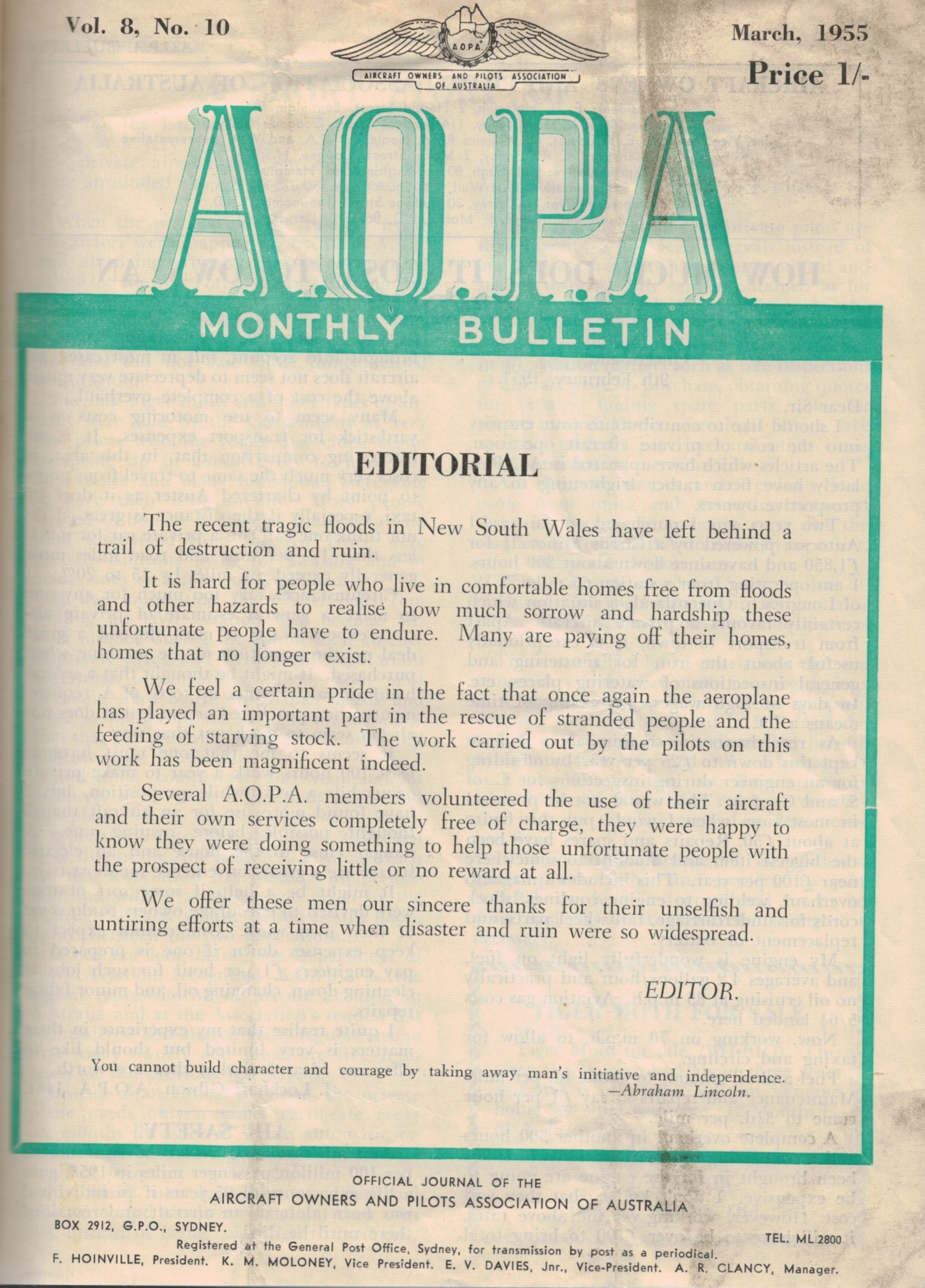 It is somewhat reassuring to see that in the past, the Australian general aviation community has been able to provide practical assistance in times of crisis.

Only last month the AOPA magazine reported on the assistance being provided to flood victims in the USA by the GA community there and bemoaned the fact that Australian aviation regulations restrict similar community service flights here. See Throwing GA Out With the Floodwater.

Moving on… here’s a fascinating article on the birth of AOPA. It’s interesting to note the effectiveness of AOPA’s advocacy, even in the early years, on changing aviation regulation for the better.

It was found that the official body controlling all civil aviation had become airliner minded delivering almost total absence of private flying and virtually all regulations governing airworthiness, traffic and pilot licencing were based on airliner needs and were so inappropriate to light plane operation that private flights were too expensive and difficult to be worthwhile. 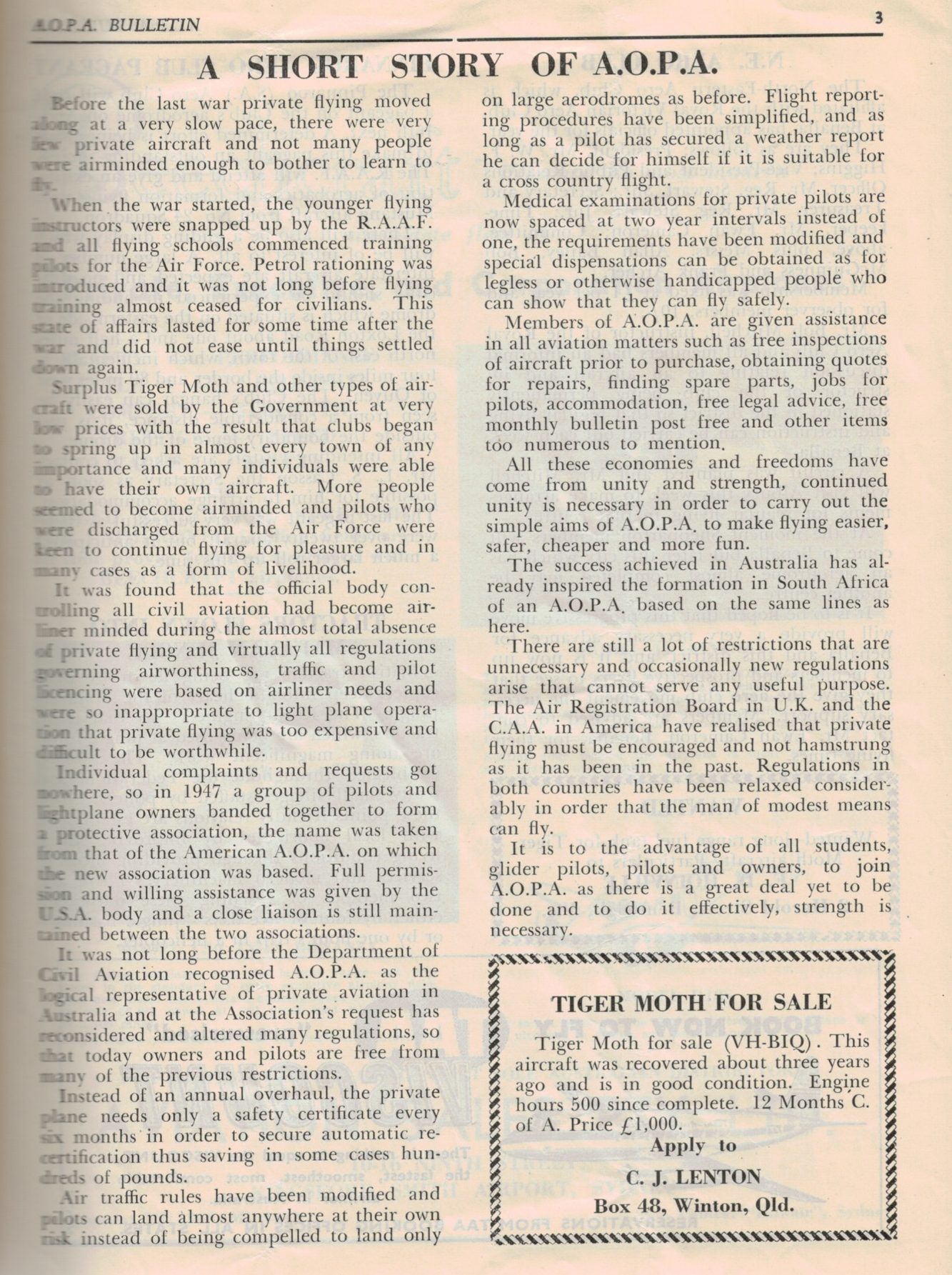 Does the sentiment in article above sound familiar? AOPA’s mission and philosophy has remained steadfast over the past 65 years. However, its advocacy for advancing the development of the GA industry is more important than ever.

Finally, here’s an early Beechcraft advertisement for the Model 35 Bonanza and the Model C50 Twin Bonanza which will be familiar to many AOPA members.  We’ve actually found a few model C35s of the same vintage on CASA’s aircraft register. Hello to all our vintage C35 owner members!

The new Beechcraft Model E35 delivers speeds! Depending on the engine chosen, the latest Bonanzas have a cruising speed of 175 to 184 m.p.h. 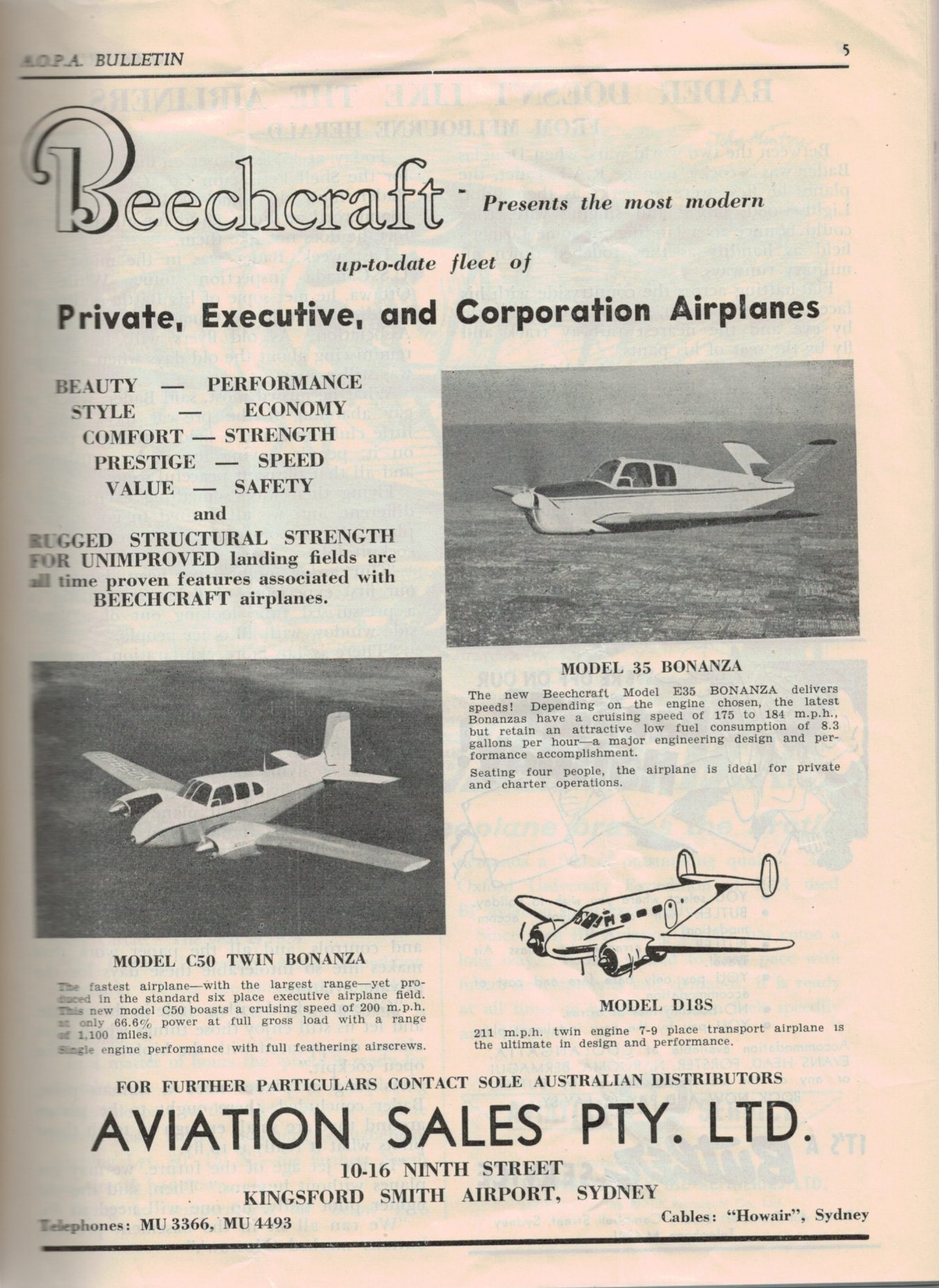 We hope you’ve enjoyed this trip into the AOPA magazine archives. If you have any requests for articles and features you remember from previous issues, drop Chris a line at chris.smyth@aopa.com.au and we’ll see if we can locate them for future editions.

In the meantime, look out for more from the archives in the coming months!