An Analogue Industry in a Digital World

An Analogue Industry in a Digital World

April 17, 2019 By Kreisha Ballantyne
Share on FacebookShare on Twitter
Kreisha Ballantyne chats with Ben Morgan about the challenges of engaging youth in aviation.
When my daughter turned 17, not game to teach her to drive myself, I offered her a package of driving lessons for her birthday. Her response shocked me: “Mum, no...

When my daughter turned 17, not game to teach her to drive myself, I offered her a package of driving lessons for her birthday. Her response shocked me: “Mum, no one drives any more! Can I have an Uber account please?”

None of her friends learned to drive, bar the one whose dad lived in the country. Admittedly, she grew up in an urban environment and knows enough about Sydney’s public transport network to be a contestant on Hard Quiz, but her comment made me think.

Every century or so, society has a revolution: the 19th century had the Industrial Revolution, the 20th century had a science revolution and the 21st  is in the midst of a technological revolution. While each generation engages with the world differently – and every generation thinks theirs is the best – the Millennials are considerably different because of the huge technology boom.

When my youngest daughter was born in 2006, a friend said, “Just think, the career she’ll have in 2030 probably hasn’t even been invented yet!” Because my daughter was born a ‘digital native’ – a name that would have meant nothing two decades ago – her ability to embrace technology dumbfounded her grandparents, who in their lifetime would become nurses, plumbers, doctors and teachers, not digital communication engagement coordinators, IT strategists, web designers or You Tubers.

When society takes a big leap, it’s inevitable that parts will get left behind.

How do we prevent general aviation from being ‘left behind’?

General aviation is in a battle for the attention and interest of youth to secure our future.  Industry associations, such as AOPA Australia, must be at the forefront of this challenge if we are to succeed.

Benjamin Morgan, AOPA Australia Executive Director, and I were having a vigorous chat about the subject only last week.

“Back in the 50s, 60s and 70s, youth engagement was due to family involvement; pilots were borne of fathers and grandfathers who flew in the war,” said Ben. “In my own case, my grandfather was a fighter pilot and my parents private pilots – I consider myself very lucky.  I grew up in a time of relative simplicity, when aviation was open and accessible, when fences, warning signs and ASIC didn’t exist!  Hands on contact and interaction with aircraft and pilots was normal – but times have changed.

“From my perspective, a large part of our industry’s problem is that aviation, or more precisely learning to fly is now competing for the attention of the consumer in direct competition with some of the biggest brands in the world.  Back in the 50s, 60s and 7os a 13-21 year old was not considered a powerful consumer – rather they were regarded as a dependent, whereas from the 1980s onward this age-group has become one of the most powerful and prominent groups for marketers to captialise.”

To test Ben’s statement above, think about the impact that digital devices, mobile phones and computer technology alone have made.  While now commonplace and ordinary, we have a national group of 13-21 year olds who own a computer, tablet and smartphone (all integrated into the school learning curriculum) which all consume monthly technology subscriptions, mobile call costs, internet and data expenses, application and online game purchases and much more.  And, these devices have reshaped the way in which young people work and communicate.  All of this has made this age group the hottest consumer target group globally and competition in this space is only getting stronger.

So how does this impact our industry and the future of general aviation?

The above age group on average will spend somewhere in the realm of approx $10-15,000 over a eight-year period on technology alone.  If general aviation is to succeed, we must understand that we are in competition for this spending, that our value proposition or attraction mechanism must be stronger.

In 2019 and beyond we must develop new and innovative ways to both encourage youth and parents to take an interest in private and commercial aviation, encouraging our industry to become more visible and attractive.  But how do we do this in a society where consumer interaction has become the dominion of very large corporations who have become experts at marketing and engagement?

“Ultimately, Australia’s general aviation industry is now up against the likes of Apple, IBM, Microsoft, Samsung, HTC, and no end of corporations who want access to parents’ wallets,” says Ben.  As an early adopter of technology, with a chain of Apple Stores at a young age, Ben understands youth’s appetite and passion for technology.

“I feel I have a responsibility to use my experiences on consumer habits to work with industry and develop a methodology to cultivate that new level of interest,” he says. “For the first time in the history of aviation, we are now understanding that our industry must compete for the attention of youth in the same way as Apple, Nike, NRL, Google, Netflix. Major brands must innovate to cultivate and we too must meet this challenge.

“It’s critical that we keep in perspective that we are in fact competing with the giants. It’s David v Goliath problem: our resources are commensurate to our size. However, this doesn’t diminish the scale of our challenge. It’s within the confines of this ever-expanding  world of communication that new levels of interest and participation are growing across our sector.”

A superb example is Facebook with its growing community of aviators. AOPA Australia is taking advantage of this, along with advancement in digital communications, with a weekly and monthly digital magazine. What’s important in attracting youth to our industry is understanding that the language of communication has changed.

“Aero club management are finding it difficult to have a conversation with young people,” explains Ben. “Youth today are growing up in an environment where digital technology is their pen and paper. We have a smartphone that has several thousand times more the computing power than the Apollo command module computer. They have a device that is socially connected – they are able to view and comment on a world of communication that is expanding at an incalculable rate. We’re in danger of becoming an analogue industry in a digital world.”

In an attempt to bridge the chasm between analogue and digital, Ben introduced the Junior Pilots’ Initiative, which utilises digital tools, beginning with the purchase of six flight simulators which AOPA has taken to air shows and events in a first attempt at youth engagement. The effect was unexpected, as Ben explains, “We struggled to get enough sims! We can’t keep up with the demand. What has amazed the AOPA volunteers is the veracity with which the young people have approached the sims; a six year old can jump on the computer, having never used a simulator program in their lives, and within five minutes they have sufficient understanding of the effects of the controls, climbing, turning etc. Around 70% of these kids will be able to land successfully after about 15 minutes on the sim. They continue this experience at home; we foster a sense of community.”

In late 2018, Ben acquired three Cessnas for the Junior Pilots’ Initiative, where they will be put to work providing youth with their first flight experiences. AOPA Australia members will be invited to share their love of flying with young people at events across Australia, helping gift first flight to hopeful future pilots.  Each aircraft will be equipped with GoPro cameras which will record each and every experience and will be uploaded to the AOPA website and social media channels, helping connect the association to a growing national audience of youth.

The Junior Pilots’ Initiative depends on mentors and AOPA members are encouraged to share their wealth and depth of experience in becoming AOPA Mentor Pilots. These mentors will have the responsibility of flying the junior pilots to events, demonstrating airmanship, professionalism and pride in clean, beautiful, AOPA-branded aircraft. The junior pilots will be issued with a passenger logbook which enables them to log their flights and become part of the AOPA community.

With AOPA’s intention to build a bridge between young people and experienced aviators,  we suspect each has as much to learn from the other.

In April this year, AOPA introduced a general aviation virtual reality simulator, which has to be experienced to be believed. Custom built, and modified to travel with us on the AOPA bus, the VR Sim is AOPA’s most exciting youth-engagement tool yet. To showcase the VR Sim, we are launching AOPA Village at Wings Over Illawarra this year. The village will include the Junior Pilots’ simulators, a pilot bar, AOPA’s new Drone Zone, which will offer an interactive flying exhibit, as well as engagement from our partners at the SAAA, GFA, HGFA and AMROBA.

“2018 was an excellent year for the association,” Ben tells me. “We know we have had a chequered past as an organisation, and AOPA takes full responsibility for that, but everything we do today is around improvement. The inter-association relationships we’ve build with the SAAA, GFA and AMROMA have strengthened us considerably and we’re looking forward to an enormous Ausfly this October.  Everything we are showcasing at WOI will excite passion in young people, leading them to consider a career, or a hobby, as a pilot.”

The most important aspect of the Junior Pilots’ Initiative, which Ben reiterates at the end of our interview, is the AOPA members. “The support of the members has made this progam a reality,” he says. “None of this would be possible without our members and their loyalty, generosity and spirit.”

If you’re interested in volunteering at the AOPA Australia Exhibition Village, contact Ben Morgan on benjamin.morgan@aopa.com.au. All volunteers will be granted free entry to the air sho 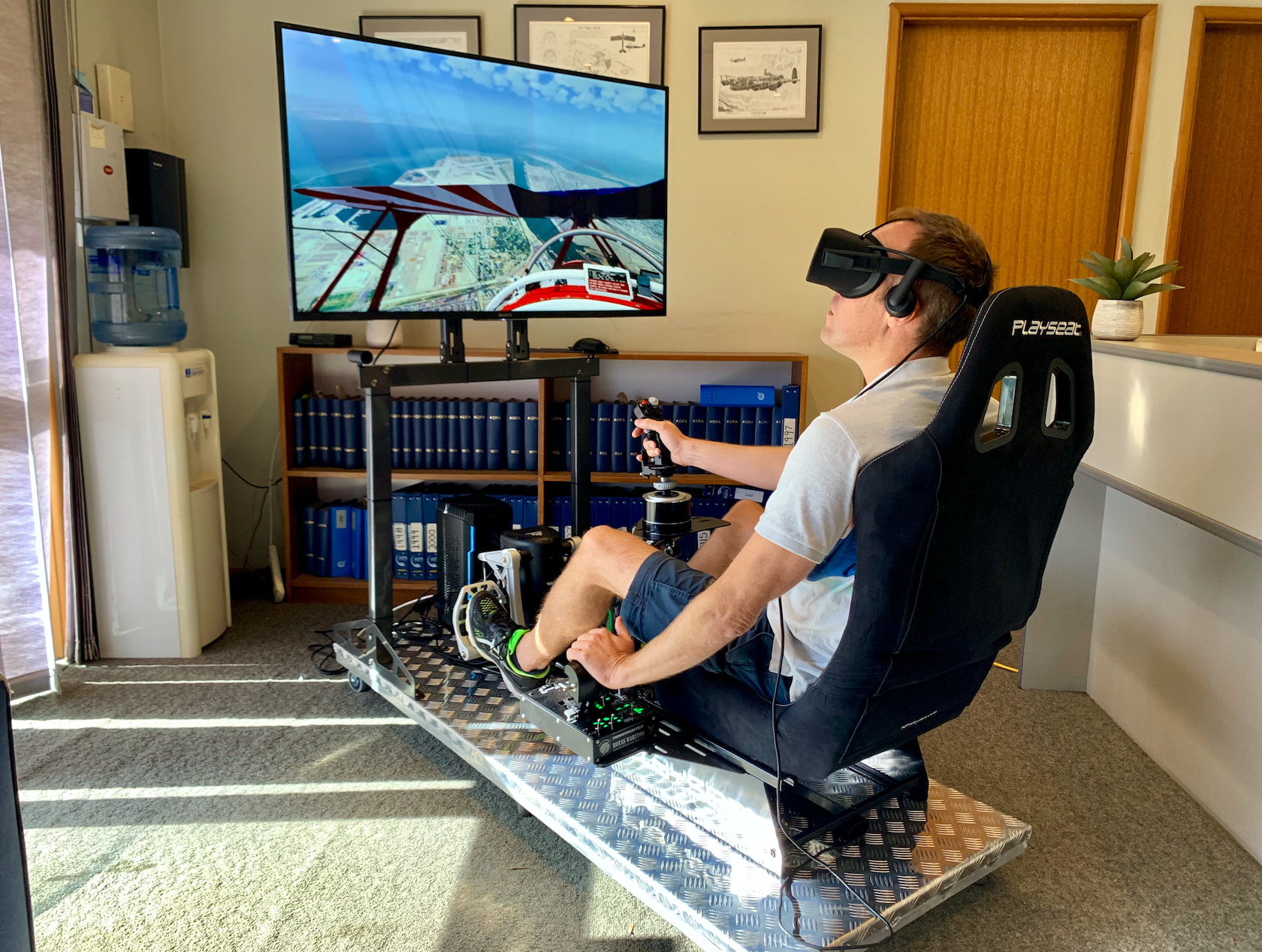 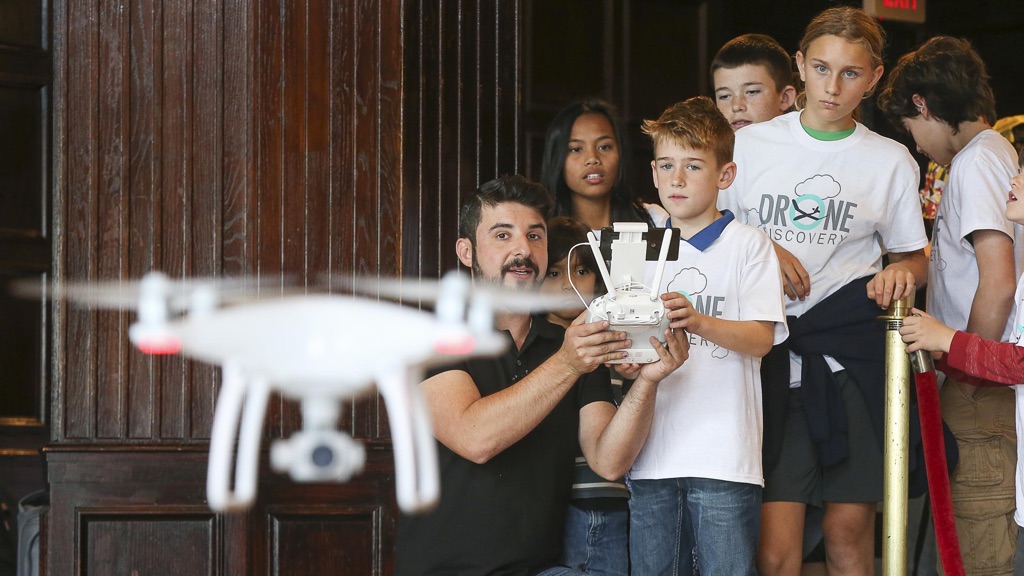 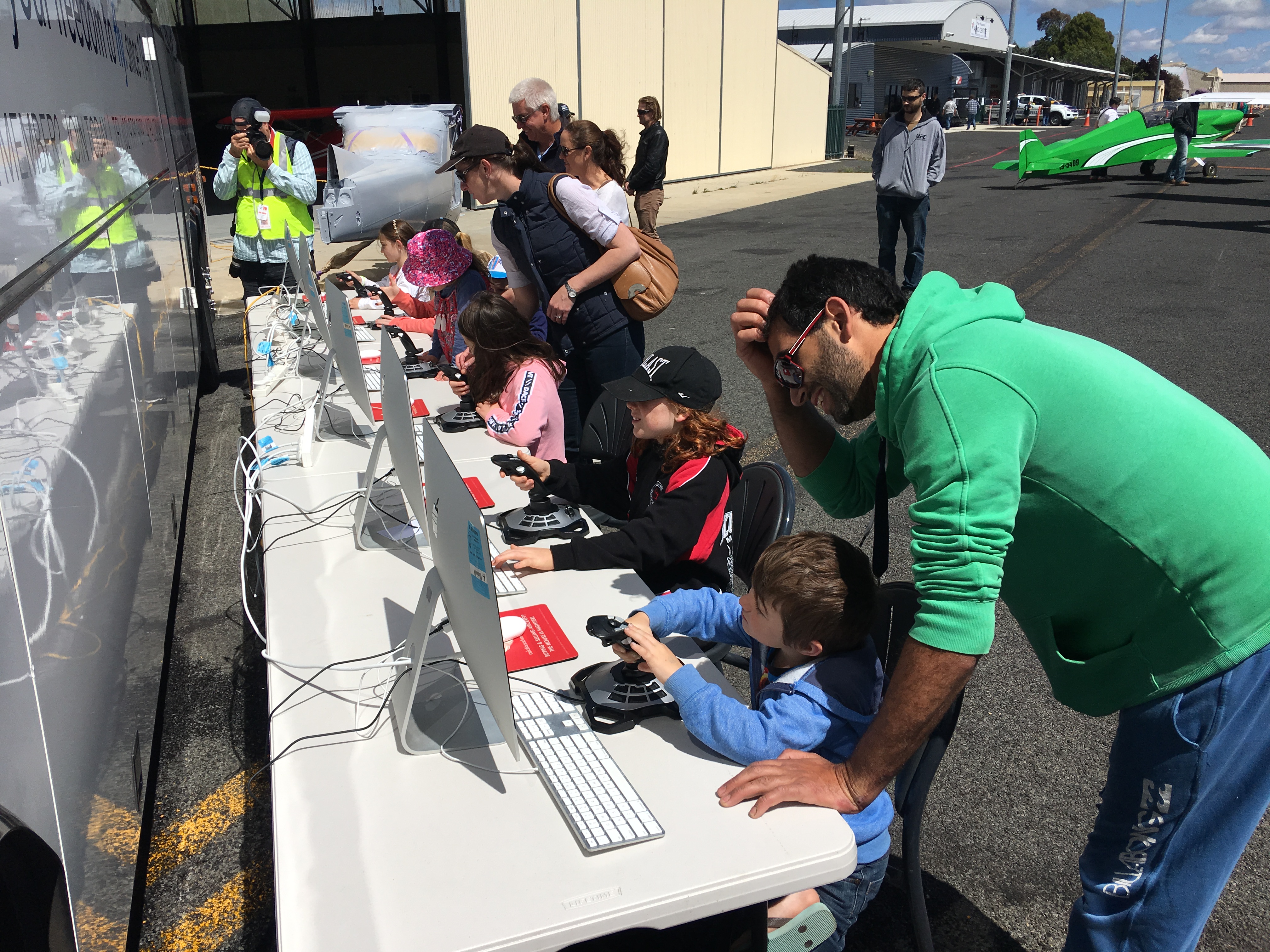 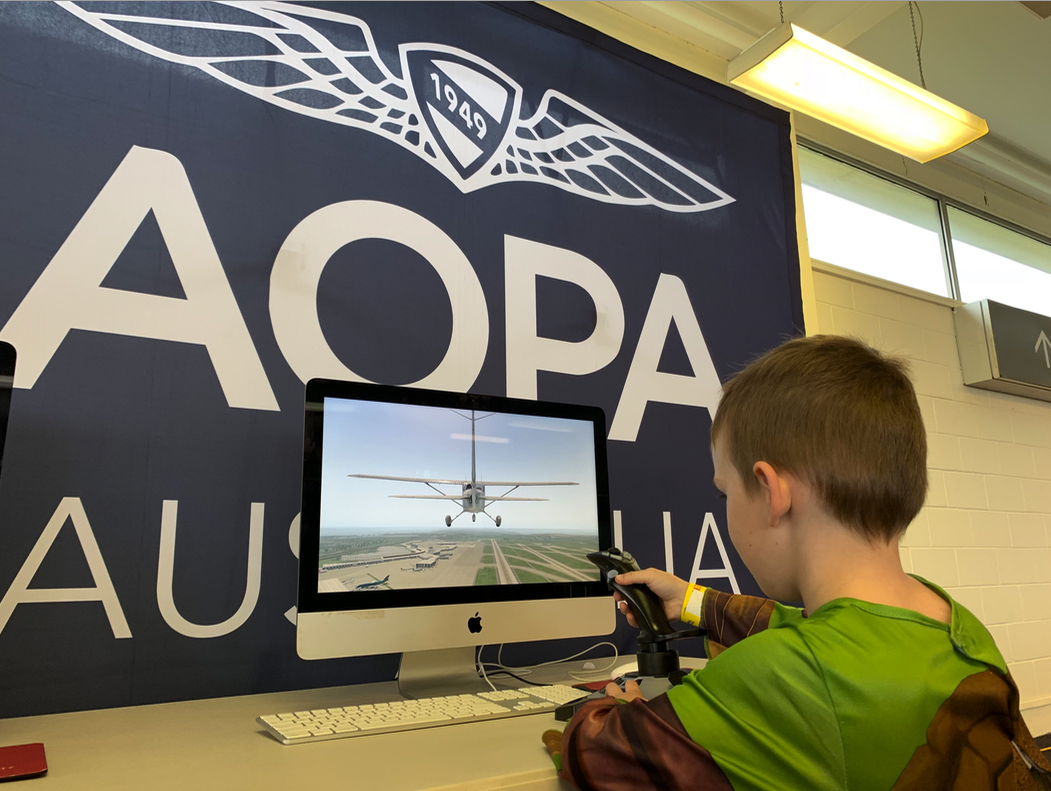