November 19, 2019 By Benjamin Morgan
Share on FacebookShare on Twitter
AOPA Australia's BENJAMIN MORGAN reports.
The local Bendigo aviation community has called on AOPA Australia for assistance, following the release of a proposal to introduce fees and charges at the airport. Over the past five...

The local Bendigo aviation community has called on AOPA Australia for assistance, following the release of a proposal to introduce fees and charges at the airport.

Over the past five years, Bendigo Airport has been extensively upgraded to attract RPT operations, including a new 1,600m sealed runway, upgraded taxiways, and apron areas.  These upgrades have cost in excess of $15 million, facilitated through federal, state and local government funding.

The introduction of RPT operations into and out of Bendigo Airport has resulted in substantial increases in airport operating costs, which council is now seeking to recover through the introduction of fees and charges, including landing, parking, and commercial training fees.  These fees are targeted at general aviation operators.

AOPA Australia has written to the City of Greater Bendigo requesting a meeting.

Of the 80 airports listed by air services in Victoria, about half are privately run and 40% have some landing charges. Of the government-run airports, 10% charge landing fees varying from $1.50 up to $10 per passenger. There are 8 certified airports, 29 registered and 41 unregistered. RPT services operate at the certified aerodromes of Tullamarine, Essendon, Avalon, Moorabbin, Mildura, and Bendigo and during the winter months at Mt Hotham. RPT Services have been withdrawn at Portland due to declining passenger numbers (which peaked at 14436).

Many of the local airport users at Bendigo Airport have been contributing to the running costs through leaseholders’ fees rates and airport access fees, others contribute indirectly by paying hangarage fees, by renting aircraft and club membership.

A substantial amount has been spent (primarily from Federal and State Government Grants) upgrading the main runway taxiway D and some of the Apron area to cater for planes in excess of 5700 kilograms. The airport has also had 6.6 kilometers of new security fencing, additional airport reporting officers employed, as well as terminal upgrades to cater for the larger regular public transport, private charter jet operation and RAAF political transport aircraft.

The upgraded classification of the airport from Registered to Certified comes with increased costs and security requirements that have little benefit to anyone except the Regular Public transport service. Additionally, existing users face the requirement of Australian Security Identification Cards at $223 per year if the public transport fees increase.

These upgrades have provided little benefit for the airport users that have been paying for their hangar sites at the aerodrome. The airport users still have to contend with access to their sites by a rough dusty gravel track, (prior to sealing the road, the Air Ambulance labeled their access road as “Brumby’s bush track” ), and lack of basic facilities such as toilets, electricity, and water.

According to recent correspondence with the Bendigo Airport manager, current direct income from the lease and license fees is just under $120,000 with an additional $51,000 rate revenue. This rate revenue, however, does not go to the airport budget but straight to consolidated revenue.

Some of the users at the airport are considered as ‘for community benefit’ and not only appear to be on a negligible site rental agreement but also appear to be exempt from the proposed new charges (even though they are commercially operated by multinational companies).

Recreational Aviation Australia suggests that an average recreational pilot (excluding instructors and students) flys about 25 hours per year. This would equate to around 30 landings at your local airport (about $360). The proposal does not distinguish between a touch and go landing and a full stop landing, all proposed to incur the $12 charge.

The estimated number of passengers using the Bendigo Airport Regular Public Transport service annually is about 25000. The City of Greater Bendigo will not release figures relating to the financial return from these passengers stating ‘commercial in confidence’. (at $12 per passenger this is about $300,000).

If you share my concerns I suggest that you email them directly to Vicki Bayliss, Bendigo Airport Manager at v.bayliss@Bendigo.vic.gov.au 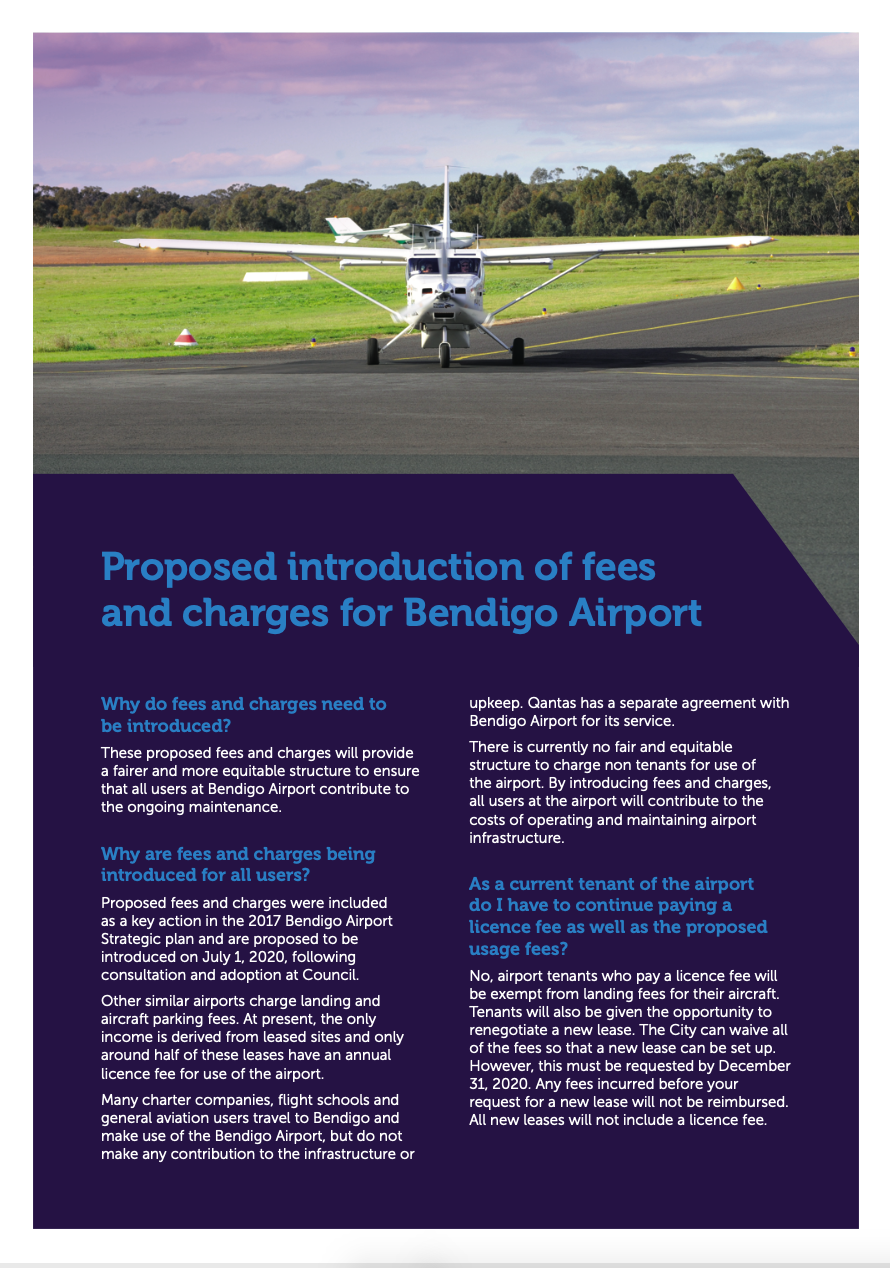 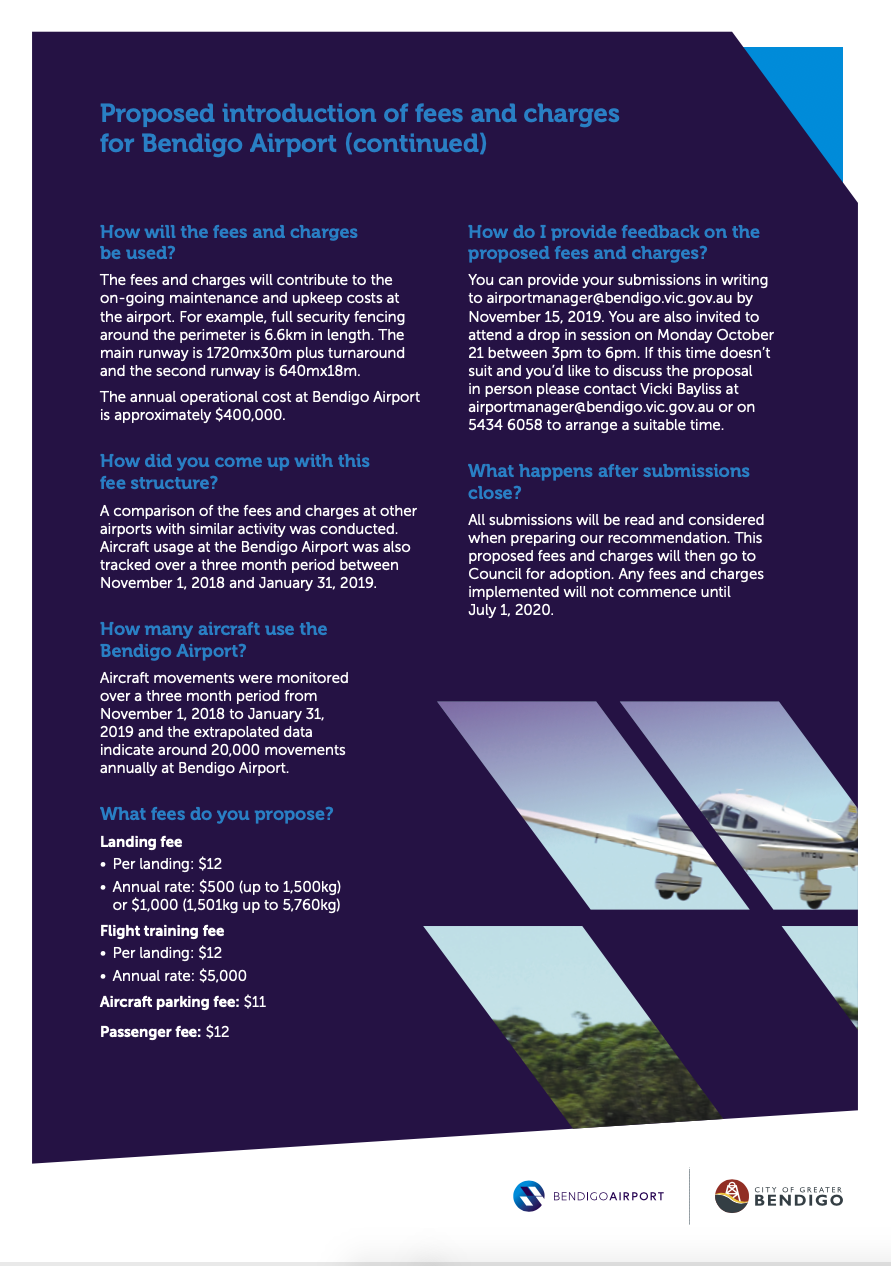