September 3, 2019 By Kreisha Ballantyne
Share on FacebookShare on Twitter
AOPA Australia's KREISHA BALLANTYNE reports.
The Aircraft Owners and Pilots Association of Australia is pleased to announce the launch of our new Bush Pilots Advocacy Panel, to provide the national pilot community with broad representation... 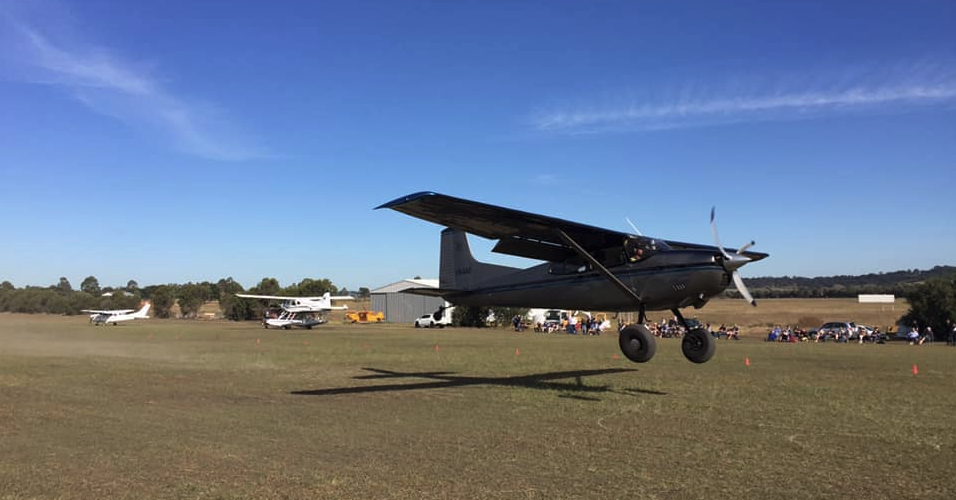 The Aircraft Owners and Pilots Association of Australia is pleased to announce the launch of our new Bush Pilots Advocacy Panel, to provide the national pilot community with broad representation on issues directly related to Bush Flying, integrating these important topics into the national AOPA Australia advocacy agenda.

“Bush flying has become a significant sector within the general and recreational aviation industry, bringing with it many new and diverse advocacy challenges to ensure it’s continued growth and success.”, AOPA Australia Executive Director Benjamin Morgan.

“I am looking forward to working with our panel Chair, Mr David Jardine, and Co-Chair, Mr Tim Howes, who are both well respected and passionate ambassadors for the bush flying community.

“Our new Bush Pilots Advocacy Panel has been established with clear terms of reference and will work alongside the association in helping address key industry challenges, along with unlocking opportunities for the aviation community and Bush Pilots in particular.”, he said.

“Bush flying has become very popular, driven by the power of social media which has promoted the fun and adventure involved.  I look forward to working with my state representative colleagues and the AOPA Australia Executive Director in developing a national advocacy agenda, helping promote access, education and safety for the sector.”, BPAP Chair, Mr David Jardine.

“The first task of the new BPAP panel is to call for nominations for individuals seeking to represent their respective states, I encourage those within the aviation community who are passionate about bush flying to consider making an application.  Representative terms are for two years.”, he said.

If you would like to participate, please submit an application to;

Your application should include;

1.1  The purpose of the AOPA Australia Bush Pilots Advocacy Panel (BPAP) is to provide the AOPA Australia Executive Director and Board of Directors with informed, objective high-level advice from the bush flying community on current, emerging and potential issues that have, or may have significant implications for;

1.2  The BPAP is the primary advisory panel through which AOPA Australia will seek input on current and future bush flying policy approaches.

2.1.1  Contribute to the indentification of safety, regulatory and community issues within the bush flying sector.

2.1.2  Consider indentified issues and provide a panel review on prioritiess to be addressed, including future reform activities.

2.1.3  Provide a consensus view, wherever possible, on the objectives and poilicy outcomes of actions or interventions sought to address identified issues.

2.1.4  Be a source of industry specialised advice or technical experience on options or proposed actions, and where necessary establish, task and oversight relevant working groups.

2.1.5  Assess the outputs or recommendations of working groups.

2.1.6  Advice on non-regulatory interventions to address issues, including actions that require CASA or industry actions and resources.

2.1.7  Provide advice on the development and implementation of regulatory changes and reforms.

2.2  Guiding Principals for the BPAP

2.2.1  AOPA Australia and BPAP members will conduct their business at all times in a way which promotes respect, mutual trust, partnership, honesty and transparency.

2.2.2  The approach to aviation advocacy issues by both AOPA Australia and the BPAP will be driven by sound risk-management and informed by data.

2.2.3  AOPA Australia will seek advice, and wherever possible consensus from the BPAP to the objectives and policy settings of any advocacy activities.

2.2.4  Recognising that full consensus may not be possible in all circumstances, BPAP members will support the principals of consensus outlined in Section 6 and respect teh overall positions achieved by the BPAP.

3.1  BPAP membership consists of between 10 and 12 individuals representing the Bush Pilot community who have agreed to serve as members, plus two representatives nominated by AOPA Australia.

3.2  The AOPA Australia Executive Director will seek membership nominations in order to establish the widest possible Bush Pilot representation and expertise and invite individuals to serve as members of the BPAP for a period of two years.

3.3  The representatives nominated by AOPA Australia will be:

3.3.2  A member of the AOPA Australia Board of Directors

3.4  To enssure there is a sufficient number of qualified members on the BPAP at all times, individual appointments may be made for different terms in the first instance to allow for staggered tenures.

3.5  A representative of CASA will be invited to attend meetings as an observer and the Chair may invite other observers on occasion.

3.6  The members of the BPAP serve without remuneration and accept that they, or the organisations they represent, will bear the costs involved in their participation in BPAP meetings and related work.

3.7  Before the expiration of the Chair’s term, the AOPA Australia Executive Director will appoint (or re-appoint) a Chair for aperiod of two years after consulting with members of the BPAP.

3.8  The Chair of the BPAP will serve as the primary point of contact between the AOPA Australia Executive Director and other members of the BPAP on matters referred to the ASAP for consideration and advice.

3.9  The AOPA Australia Executive Director may ask the Chair to assume the responsibility for other functions as required.

3.10  The Terms of Reference, structure and operation of the ASAP will be reviewed at least once every two years.

4.1  Meetings of the BPAP will be held approximately 6 times per year.  Video conferencing access will be made available to facilitate members’ participation remotely if required.

4.2  Draft agendas will be developed in consultation with the Chair and distributed by the Co-Chair at least three weeks prior to a meeting.

4.3  A final agenda and any papers for the meeting will be distributed at least one week prior to a meeting.

4.4  In consultation with the Chair, the Co-Chair will prepare a report about key outcomes from each meeting for reporting to the AOPA Australia Executive Director, Board of Directors and the broader aviation community.

4.5  Minutes will be prepared by the Co-Chair and, once approvd by the Chair, publsihed on the AOPA Australia website.

5.1  The BPAP may establish a Consultative Working Group for referring specific issues, subject matter or domain for advice.

5.2  Where established, Consultative Working Groups will provide a forum in which broader aviation community members and relevant technical experts can provide their input to the BPAP on specific issue and proposals.

5.3  Any Consultative Working Group will be tasked by the BPAP directly and do not determine their own work programs.

5.5  Following receipt of nominations, the BPAP will invite individuals to serve as members of the Consultative Working Group and provide detailed tasking information.

5.6  Reports or advice from a Consultative Working Group will be provided to both the AOPA Australia Executive Director and the BPAP.

5.7  A Consultative Working Group will normally be disbanded upon completion of the specific task.

5.8  Members of Consultative Working Groups server without remuneration and. accept that they, or the organisations they represent, will bear the costs involved in their participation in meetings and related work.

5.9  The BPAP will seek a nomination from amongst it’s members to participate in Regional Airspace and Procedures Advisory Committee (RAPAC) meetings, on an as required basis.

6.1  A key aim of the BPAP is that a consensus be reached, wherever possible, in the finalisation and preparation of advice to the AOPA Australia Executive Director.

6.2  For present purposes, ‘consensus’ is understood to mean agreement by all parties that a specific course of action is acceptable.

6.3  Achieving consensus may require debate and deliberation between divergent segments of the aviation community and individual members of the BPAP or its Consultative Working Groups.

6.4  Consensus does not mean that the ‘majority rules’. Consensus can be unanimous or near unanimous.  Consensual outcomes include;

6.4.1  Full Consensus:  where all members agree fully in context and principal and fully support the specific course of action.

6.4.2  General Consensus: where there may be disagreement, but the griup has heard, recognised, acknowledged and reconciled the concerns or objections to the general acceptance of the group. Although not every member may fully agree in context and principle, all members support the overall position and zagree not be object to the proposed recommendation.

6.4.3  Dissent: where differing in opinions about the specific course of action are maintained.  There may be times when one, some, or all members do not agree with the recommendation or cannot reach agreement on a recommendation.

6.5  The BPAP and Consultative Working Groups should establish a provess by which it determines if consensus has been reached.  The way in which the level of consensus is to be measured should be determined before substantive matters are considered.  This may be by way of voting or by polling members.  Consensus is desireable but where it is not possible, it is important that information and analysis that supports differing perspectives is presented.

6.6  Where there is full consesnsus, the report, recommendation or advice should expressly state that every member of the BPAP or Consultative Working Group was in full agreement with the advice.

6.7  Where there is general consensus, the nature and reasons for any concern by memnbers that do not fully agree with teh majority recommendation should be included with the advice.

6.8  Where there is dissent, the advice should explain the issues and concerns and why an agreement was not reached.  If a member does not concur with one or more of the recommendations, that person’s dissenting position should be clearly reflected.

6.9  If there is any opportunity to do so, the BPAP or Consultative Working Group should re-consider the report or advice, along with any dissenting views, to see if there might be scope for further reconciliation, on which basis some, if not all, disagreements may be resolved by compromise.

7.1  Although members of the BPAP and it’s assoicated groups serve without remuneration, there may be occaions when AOPA Australia may cover certain costs, and/or reimburse members for certain expenses, incurred in connection with their BPAP-related work.  Such arrangements will be exceptional, and a matter at the direction of the AOPA Australia Executive Director.

7.2  Membership of the BPAP and associated groups that may be established from time to time will be specified in Appendicies to these Terms of Reference, and may be amended as necessary without a need to amend the Terms of Reference themselves.

7.3  Subject to applicable laws, documents and records of communications by, from, to, between and concerning members of the BPAP or it’s associated groups, as these may relate to the work of the BPAP, will be afforded an appropriate level of confidentiality.

8.1  The Co-Chair, in consultation with the relevant Chair, is repsonsible for;

8.1.1  Establishing, maintaining and publishing the annual program of BPAP meetings;

8.1.5  Providing a technology platform to facilitate remote collaboration and discussion;