The Future for Armidale Airport and the Local Community

HomeAdvocacyAirportsThe Future for Armidale Airport and the Local Community

The Future for Armidale Airport and the Local Community

The future for Armidale Airport and your community

My name is Benjamin Morgan and I am the Executive Director of the Aircraft Owners and Pilots Association of Australia and I represent the interests of our general aviation community.  By way of background, the AOPA Australia was formed in 1949 and for 70 years our association has represented the general aviation industry on a broad range of important regulatory and government policy matters, including airport concerns.

With respect to council’s EOI, I would hope that you can appreciate the genuine concern that aircraft owners, pilots and aviation businesses now have regarding council’s recent expression of interest (EOI), which has communicated a message of uncertainty for the future of general aviation at Armidale Airport.

AOPA Australia does not necessarily agree with the view that an EOI is the best methodology for council to be seeking to create discussion with other airport operators and management and question whether a more collaborate approach could have been exercised.

Regrettably, the EOI appears to have been released publicly by council in advance of any open discussions with the local community and aviation industry, which may have served to help avoid conflict between council and your local aviation stakeholders.

As has already been stated, privatised airports operate exclusively for profit – and in the vast majority of cases – to the detriment of general aviation and community benefit.  Private enterprise is under no obligations to consider the well-being of anyone other than their corporate interest and their shareholders.

Armidale Airport is an essential community asset that serves as an invaluable gateway for personal and business travel, commerce and freight, along with being a major driver for your local economy, keeping thousands employed.  Your airport enriches the lives of each and every resident and provides a powerful resource to drive multi-faceted economic growth and prosperity for your region.

The general aviation community’s concerns stem from decades of first-hand experience, whereby we have witnessed the slow but steady destruction of our general aviation business and aircraft ownership community through uncontrolled increases in airport leasehold fees and access user charges – all in the name of airport privatisation.

And, whilst the council may stand to make a one-off win fall at the time of initial sale, once divested from local government ownership and control, your council will find itself entirely powerless to intervene to protect the interest of your local community members, businesses owners and most importantly your economy.

Be under no illusion that the long-term consequences for your community will far outweigh any short-term financial gain that the council may make from achieving a sale.

A sale of your airport consigns the ratepayers of Armidale to a future that will see the cost of regional airfares increase to unprecedented levels, as your airline service providers are charged higher and higher fees to continue accessing the airport by its new privatised owner.

And, it won’t stop there.

Every last contractor and business that requires access to the airport to support airline activities will also suffer, burdened with a raft of new and innovative fees and charges, all aimed at maximising the returns for shareholders.  These costs will all be passed on to your ratepayers through increases in airfare pricing, making regional air travel unaffordable.

Passengers, family, friends and colleagues accessing the airport will also suffer, through a raft of new parking, taxi, bus and other fees that will be all aimed at generating maximum profit.

Private and business aircraft owners will suffer as well as they too become exposed to uncontrolled increases in movement fees and parking charges that make using the airport unaffordable.  The knock on effect will then impact your fuel service providers, who will quickly move to withdraw avgas fuel supply due to decreasing sales.  Once avgas is no longer available, visiting aircraft will seek to avoid Armidale entirely.

Most importantly and finally, given the proximity of Armidale Airport to Tamworth Airport, council could very easily find itself in a position whereby airline operators, passengers, general aviation businesses and aircraft owners simply elect to use Tamworth, seeking to take advantage of the local government owned airport which can provide access at lower fees and charges.

A major win for Tamworth, but no so good for Armidale.

If the council is willing, I would like to travel to Armidale to meet with you all to discuss the situation and to provide a further briefing.  If a date and time that is suitable to council could be provided, I shall be happy to accommodate.

Thank you again for your time and I look forward to speaking soon. 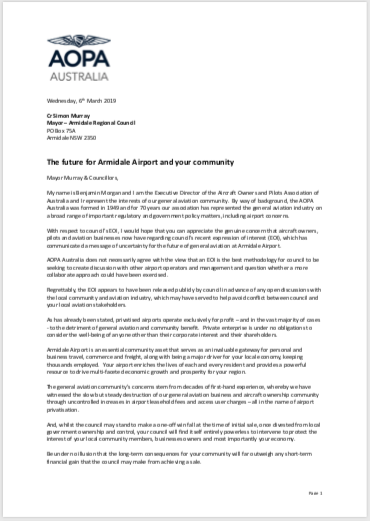