January 30, 2020 By Kreisha Ballantyne
Share on FacebookShare on Twitter
After a loss of engine power, probably due to insufficient fuel or an in-flight fuel management error, a twin-engined Cessna 310 aircraft did not maintain a safe flying speed before it collided with terrain just short of the runway, an ATSB investigation has found.
The Cessna T310R was on approach to land at a private airfield at The Lakes, adjacent to the Pacific Highway south of Port Macquarie on the NSW North Coast, while... 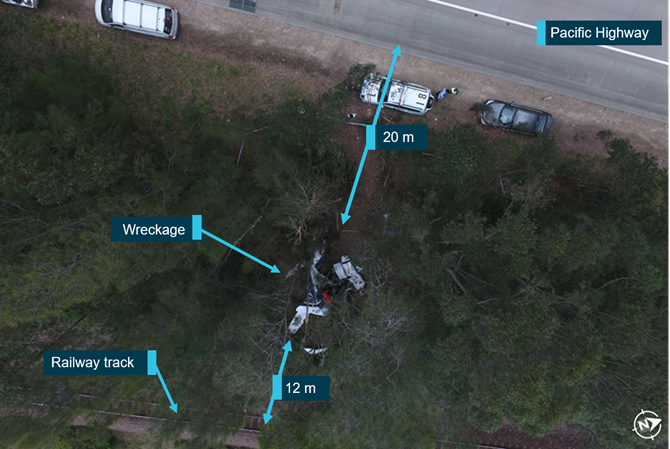 The Cessna T310R was on approach to land at a private airfield at The Lakes, adjacent to the Pacific Highway south of Port Macquarie on the NSW North Coast, while conducting a private flight from Toowoomba, Queensland, with a pilot and passenger on board.

When the aircraft was about 8 km from the runway, a witness recalled hearing what he thought was a single-engine aircraft ‘cough’ and then stop. A separate witness, who was driving south on the Pacific Highway, recalled seeing the aircraft descending slowly, then roll to the left, pitch down and descend rapidly to the ground.

The aircraft was subsequently found to have collided with terrain, coming to rest in a narrow wooded strip of land between the highway and the main northern railway line, about 800 metres from the runway threshold. The pilot and the passenger were fatally injured and the aircraft was destroyed in the accident.

The ATSB investigation identified that during the final descent, the aircraft’s left engine was not producing power and the right engine was operating at low or intermittent power. The loss of engine power was probably the result of either insufficient fuel for the flight or an in-flight fuel management error.

Despite that power loss, examination of the wreckage identified that the aircraft was configured for a powered approach, in a high‑drag configuration with the left and right engine propellers unfeathered, the landing gear down and the flaps partially extended. The low engine power combined with the high-drag configuration meant that the aircraft’s speed and altitude could not be maintained.

The investigation report notes that maintenance of a high‑drag configuration while the aircraft’s performance declined indicated that either the pilot did not recognise any engine abnormalities until late in the approach, or assessed that sufficient engine power remained to reach the runway.

ATSB Chief Commissioner Greg Hood said this accident highlighted how a loss in power requires different responses depending on whether an aircraft has single or multiple engines.

“However, regardless of the configuration, in order to maximise the survivability outcome it is imperative that the pilot retains control of the aircraft and maintains a safe airspeed,” Mr Hood said

“Where the aircraft’s performance degrades to the point that continued safe flight is not possible, the pilot must shift their focus to conducting a forced landing.”