December 5, 2019 By Kreisha Ballantyne
Share on FacebookShare on Twitter
Former AOPA Australia president, Andrew Andersen, has been appointed as the new chair of the General Aviation Advisory Network (GAAN). KREISHA BALLANTYNE reports.
The GAAN provides a forum for industry representatives to work collaboratively in providing advice to government in response to pressures facing the GA sector.  Andrew also currently serves as Vice... 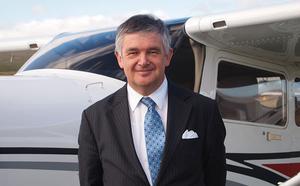 The GAAN provides a forum for industry representatives to work collaboratively in providing advice to government in response to pressures facing the GA sector.  Andrew also currently serves as Vice President, Pacific Region, of the International Council of Aircraft Owners and Pilots Associations (IAOPA), the worldwide umbrella organisation working on global issues affecting general aviation, whose affiliates include AOPA Australia.

Members of the GAAN are selected based on their skills and expertise in the aviation industry, rather than their affiliation to a particular organisation. They come from a cross section of the diverse GA sector including training, manufacturing, maintenance, sport and recreation, rotorcraft and fixed wing aircraft, aerial application, remotely piloted aircraft systems and medical operations.

During May 2018, the GA Advisory Network finalised its General Aviation Flight Plan, the network’s 2018–19 work plan for the GA sector.

The plan has three priorities:

In October 2016, the then Minister for Infrastructure and Transport commissioned a study into general aviation in Australia. The study has outlined some of the key challenges facing general aviation and identified opportunities for the industry and Government to respond to these challenges. The study was publicly released on 20 December 2017.