Countdown to the Kimberleys Outback Air-Safari 2019

Countdown to the Kimberleys Outback Air-Safari 2019

May 24, 2019 By Kreisha Ballantyne
Share on FacebookShare on Twitter
AOPA Australia's Kreisha Ballantyne takes a look at the upcoming Kimberleys Outback Air-Safari
When AOPA’s inaugural air safari to the Kimberleys booked out in under a week, Air Safari co-ordinator George Higgins knew he had found his calling. Having previously organised air-safaris at... 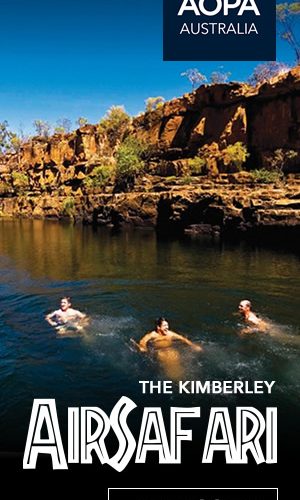 When AOPA’s inaugural air safari to the Kimberleys booked out in under a week, Air Safari co-ordinator George Higgins knew he had found his calling. Having previously organised air-safaris at his aero-club, George wasn’t surprised by the demand by AOPA members for organised flying trips, but he was delighted by the members’ enthusiasm.

“This has been a dream trip in the making,” he tells me. “The group of pilots we have got together are a marvellous bunch, with very varied interests, which has made the trip an exciting one to put together.”

The 14-night flying adventure takes in the most remote and spectacular region of Australia. The flyaway begins in Katherine – where the outback meets the tropics. The second day’s feature activity is Nabilil Dreaming Sunset Dinner Cruise –  a candle-lit three course dinner against the magnificent backdrop of the Nitmiluk Gorge, after a visiting Katherine’s School of the Air and Top Didj Cultural Experience.

The third day offers a choice between the World Heritage Bungle Bungles or Home Valley Station, with an opportunity for both groups to sample both tours, which include fishing, river tours and a station history experience.

On day six, the two groups are reunited to head to Derby for the night. This spectacular route offers the opportunity for some aerial sight seeing of the Purnululu National Park. With the afternoon spent sight-seeing in Derby, you can explore the Derby Wharf / Jetty, Wharfinger’s House Museum, Mowanjum Art Gallery and Norval Gallery, Old Derby Jail and the Boab Prison Tree.

The sixth day of the safari is devoted to some spectacular aerial sight seeing, flying to Cockatoo Island and on to Cygnet Bay Pearl Farm at half tide, when the greatest volume of water passes through the horizontal falls. Following this, the group will fly over the Buccaneer Archipelago, a beautiful area consisting of some 800 to 1,000 rocky islands with small embayments and secluded white sandy beaches. There’s a tour of a pearl farm and a seafood barbecue at Cygnet Bay.

As all seventh days should be, day seven is a rest day. Day eight offers the exhilarating experience of a twelve seat rib with twin 250HP engines, highlighting the reef and waterfall. Leaving the Dampier Peninsular on day nine involves flying to Drysdale River Station for a stay of up to three nights, with an optional cruise to experience the power of the world’s largest tropical tides, in Escape Passage, cruising amongst the giant whirlpools and standing tidal waves.

There are two day trip options on day nine, travelling to some of the most remote places in Australia: a boat cruise to the majestic King George Falls, or a guided tour of the oldest Aboriginal rock art in the country. Day eleven heads to Mitchell Falls via Bell Longranger helicopters for a day of exceptional sight-seeing, while day twelve flies on to the iconic El Questro station, while day thirteen is the full day Emma Gorge Tour, which starts with a guided walk up Emma Gorge, a soak in Zebedee Springs, ‘Beef or Barra’ lunch at The Steakhouse followed by an afternoon Chamberlain Gorge Cruise. The final night of the Kimberley Air Safari will be spent in Kununurra. The short flight from El Questro provides plenty of time for some shopping and sightseeing, with a final group dinner before heading home.

Next week, AOPA Australia will interview the first group of pilots attending the air-safari.