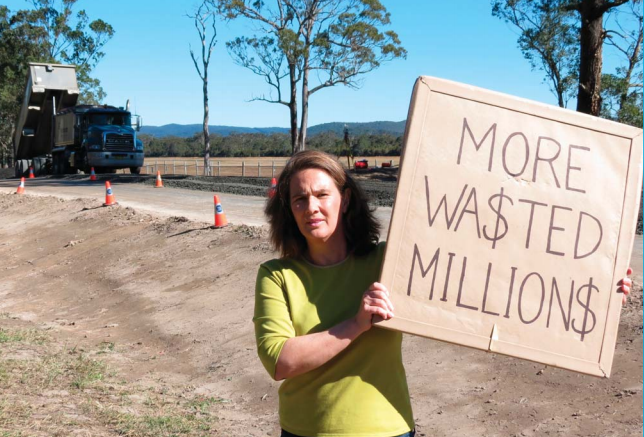 The Central Coast Aero Club has declared it is at war with the Central Cost Council, following news that Councillor Louise Greenaway (Central Coast Independent) moved a resolution for a report to be prepared and submitted to Council by 29th August 2019, to provide planning advice for the replanting of trees and foliage on the south west of the airport boundary, also requiring that no mowing, slashing or trimming of the area (including a 100metre buffer zone) can be conducted unless first subject to environmental assessment.

That a report be prepared and submitted to Council on the following:
a Council undertaking remediation on land that was formerly part of Lot 26 DP 1159349 that was reportedly cleared in or around August/September 2015 and subject to correspondence with the Department of Planning.
b Council developing a replanting plan in consultation with an ecologist prior to undertaking the remediation in minute number 659/19 part A above with such a plan specifying the proposed planting (species, size, number and location) as well as measures to ensure the plants are properly established and monitored.

That Council request the Chief Executive Officer:
a Ensure that Council not cause or permit mowing, slashing or trimming of vegetation within 100 metres of the land referred to in minute number 659/19 part A without first obtaining consent or carrying out environmental assessment as required under the EP&A Act.
b Ensure that Development applications and/or any activities (as defined under the EP&A Act) on land owned or under the care control and management of Council within 200 metres of the northern boundary of Warnervale Airport and 200 metres from the southern end of the runway are referred to Council for determination.

That the report referred to in minute item 659/19 above be submitted to the Ordinary Council Meeting on or prior to 26 August 2019.

“Once again, all the labor Councillors and Mayor have voted unanimously for what is clearly an anti-airport undertaking, and if approved will result in the loss of some 1/3 of the usable runway”, Central Coast Aero Club’s Andrew Smith.

“A displaced runway threshold will make Warnervale Airport unusable within a short space of time… it is obvious that the Central Coast Council has no intention of renewing our lease agreements beyond 2021… the Mayor has repeatedly promised the Aero Club in various emails that we would have our agreements looked at in July 2018, yet despite numerous attempts everything is falling on council’s deaf ears,

Earlier in the week the Central Coast Aero Club was advised by council representatives that airport traffic was exceeding the cap limit of 88 movements per day and that all future operations would require a full 24 hours advanced notice of movement; this includes all local private, club and flying school aircraft.

“We have sought confirmation regarding this statement and expect a response soon.  We have existed at Warnervale for some 47 years without issues, the 88 movement cap is a huge problem for our airport community and is clearly designed to negatively impact on the airport’s usability,

“The community has been backed into a corner, leaving us in a state of outright war with council, something nobody wanted.” he said.

Meanwhile John Codrington, Chairman of the Your Central Coast Airport Association reacted to the council motion, “this is a large step towards the loss of the airport for the region and clearly signals the current council’s intent not to renew the Aero Club’s license to operate in 2021.

“Warnervale Airport is an incredibly valuable community asset that has been identified as a major economic driver for the Central Coast,

“Council’s own $450,000 report into the economic opportunities the airport could generate, which has been buried and hidden by council, makes clear the positive employment, social and economic improvements the airport could deliver for families living in the region,

“Council has turned it’s back on 137 expressions of interest by businesses seeking to establish themselves on the Central Coast, because our council has become hijacked by extreme greens who are more focused on virtue signalling and moralising than they are providing infrastructure and opportunities for the ratepayers,

“An example of the utter council stupidity has been the AAI debacle at Warnervale Airport, whereby ratepayers have been forced to stump what is alleged almost $50 million to buy back the aircraft manufacturers leasehold at the airport,

“This one act of lunacy has cost the Central Coast region up to 7,000 skilled jobs and hundreds of millions in lost economic investment and benefit over the next 10 years,

“The Central Coast has one of the worst youth unemployment rates in Australia and suffers from a major welfare issues as a result.  It’s astounding that our Mayor and Councillors have sought to undermine the education, training and gainful employment of those living on the Central Coast.” he said.

Would you like to express your disappointment to the Central Coast Council Councillors and all local Central Coast Newspapers and Radio Station media contacts?

The Aircraft Owners and Pilots Association of Australia invites our members and industry supporters to send an email letter of complaint, in support of all Central Coast aircraft owners, pilots and aviation businesses, calling on council to support Warnervale Airport and the Central Coast Aero Club.  We ask that you keep your email letters of complaint respectful, polite and courteous.