The AOPA Australia submission was supported by 1,717 petitioned signatures and 127 signed letters of support, which were obtained across the five weeks leading to 21st December 2016.

Please accept the following as the Aircraft Owners and Pilots Association’s submission to the discussion paper process to bring about changes as to how medical certification is performed and what standard of medical fitness is required to operate a private aircraft.  This submission is supported by 127 signed letters and 1,717 petitioned signatures, which were obtained across a 5 week period during last quarter of 2016.

Under the current Avmed system, Australia’s general aviation industry has experienced a 34% decline in general aviation pilot numbers (loss of approx. 8,000 persons), whilst during the same period the number of RAAus pilots operating under ‘simplified’ medicals has grown by some 8,000 persons. 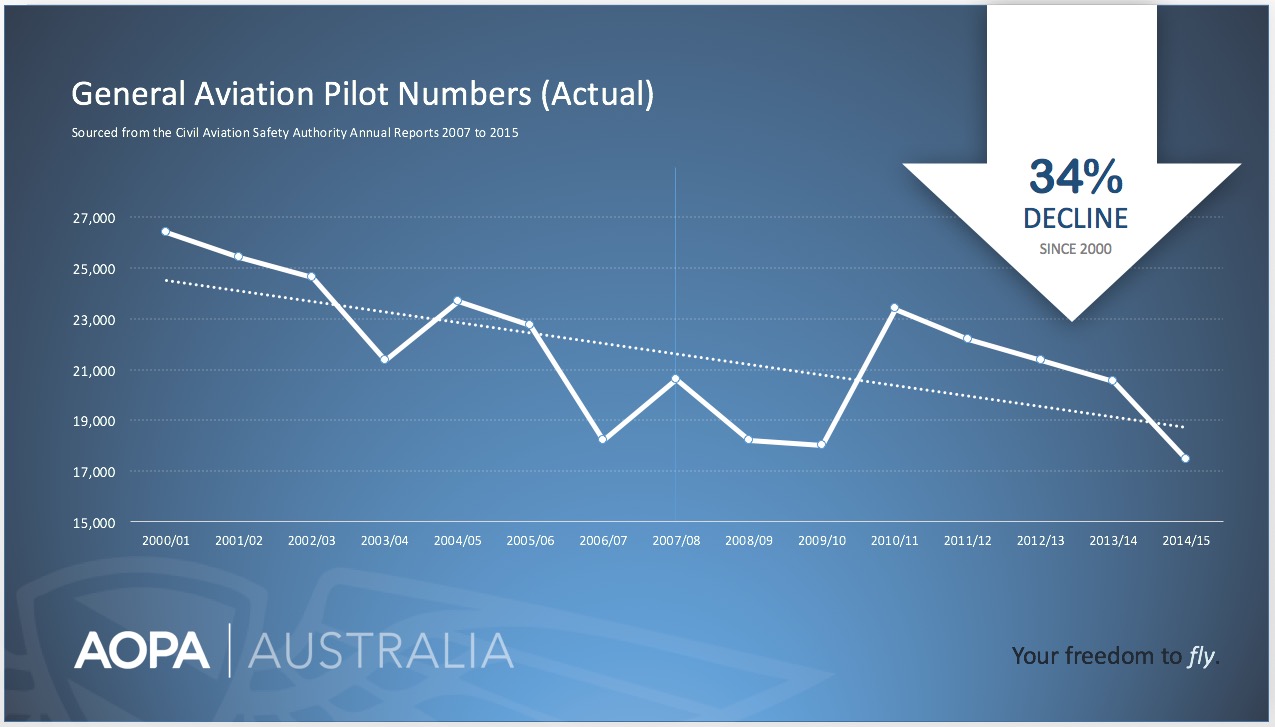 More and more private pilots are being forced to remove themselves from the CASA Avmed managed general aviation industry, no longer willing to endure the endless medical bureaucracy which has been created over the past 30 years, electing to fly on RAAus ‘simplified’ medicals in an aircraft built to a weight limit, not a certification standard.

The unintended consequence of this transference has been the wholesale decline in certified general aviation aircraft ownership, which has negatively impacted the general aviation industry supply chain – of which the maintenance industry is most affected – placing increasing cost pressure on the commercial general aviation businesses that remain.

To highlight how absurd the situation has become, we now have the RAAus seeking weight limit increases from CASA, controlled airspace access and possibly aerobatics and IFR operations in the not too distance future.  All for pilots who were declared ‘unfit to fly’ by CASA Avmed but deemed ‘fit’ by RAAus?

Currently the aviation medical branch of CASA work to a one-size-fits-all approach to certification standards for private operations, whereby a private pilot who operates a simple aircraft is required to demonstrate a level of medical fitness commensurate with operating a sophisticated turboprop aircraft under the IFR in the flight levels.

Our submission falls into two complementary proposals – Part One (1) and Two (2).  The first involves allowing the DAME to assess a candidate for a full class 2 medical, with all the privileges that standard of licence entails, while the second (2) is for a Recreational Pilots Licence (similar to what is operating in the United States and New Zealand) that has operational limitations regarding number of passengers, aircraft weight and airspace category where operations can take place.

Part one (1) of the submission draws on changes being introduced in the United Kingdom (based on their extensive 10 year evidence based study) but seeks to allow the DAME input into the certification process for private pilot medicals (Class 2), including candidates who are currently designated ‘CASA audit only’.

It has become commonplace for the DAME to question the decision-making process within CASA, when a candidate is sent for more testing despite the DAME themselves being satisfied with the medical evidence presented by a candidate’s treating specialists and feel confident the pilot presents an acceptable risk given knowledge of the type of operations the pilot generally undertakes.

The AOPA Australia firmly believe that a pilot candidate is more likely to discuss medical issues that have the potential to affect their flying if they felt they were getting a fair hearing from a doctor they trust.

The second part of the submission is based on the experience in the US and New Zealand. These countries have evaluated the evidence regarding the possibility of in-flight incapacitation that has been formed over the past decade in light sport aircraft operations that have minimal medical supervision.

The evidence is clear that there hasn’t been a demonstrated increase in incapacitation events involving this type of recreational flying. Therefore, they have seen fit to introduce a basic medical for operations of aircraft below 2000kg using motor vehicle medical licencing standards, administered by suitably qualified general practitioners with any perceived increase in risk from using this standard mitigated by putting operational limitations on the pilots using this certification.

With respect to the contents of our submission, we would appreciate formal response from CASA, specifically focussing on any areas to which CASA may disagree.

Thank you for the opportunity to provide you this submission on behalf of our members and I look forward to your response.

On behalf of the AOPA Australia Board of Directors.

The Aircraft Owners and Pilots Association of Australia was established in 1949 to ensure aircraft owners and pilots were afforded the freedom to fly without unnecessary cost and restriction. AOPA remains Australia’s leading aviation advocacy group, serving general aviation for over 67 years.

1.  The medical standard for the Class 2 Medical Certificate will be that of an AustRoads Unrestricted Private Drivers Medical with no ROUTINE requirement to attend for medical examinations except in the situations outlined below

2.  The pilot will have to make a legally binding statement that they meet this standard once prior to the age of 70 years and every 3 years after the age of 70

3.  Any pilot who does not meet this medical standard will be required to apply for their certificate by seeing a DAME. This includes those pilots who hold a Restricted Private Drivers License Medical or those pilots who are currently classified as “renew by CASA only”. The DAME will have the delegation to issue the certificate after due consideration. CASA AVMED would be involved only if the DAME wants backup or support for decision making

4.  Applicants with a history of any of the following conditions must apply to a DAME for consideration of their case. They must support their application with records from their GP and/or Specialist.

5.  It is anticipated that for simple cases properly backed up by specialist reports that the DAME may in consultation with the applicants General Practitioner and/or Specialist be delegated to issue a class 2 certificate for a restricted period of time. If the DAME is not prepared to do this he/she may refer the case to CASA AVMED for full assessment

6.  Under the proposed system the onus is on the pilot to report any possible reduction of flying capabilities as a result of medical conditions to their DAME. The DAME can advise the pilot and certify the pilot fit to fly at a later date if he/she is happy with the recovery. If the DAME is unhappy with the situation he/she may refer the matter to CASA AVMED

For many years, there has been a growing divide between the aviation medical section at CASA and the private /recreational aviation community concerning the testing regimen imposed on candidates with chronic conditions requiring on going medical supervision.

Often within this process, the candidate’s treating physicians are ignored despite these specialists having a comprehensive overview of their patient.

Today, pilots with stable chronic conditions – that are being actively treated with the latest medical protocols and displaying a risk of sudden incapacitation below that of the general population – are still subjected by Avmed to a barrage of tests costing thousands of dollars that their treating doctors feel are unnecessary. These same pilots can pass the standard to operate under RAA medical rules with the evidence from RAA over the past 10 years showing sudden incapacitation is not a factor in crashes involving aircraft in their area of operation.

Avmed themselves assess every candidate as if they are going to be operating the highest weight aircraft available on a Class 2 medical, in the flight levels, under the IFR. This equates to an aircraft such as a Beech Kingair C90.

In other words it’s a one size fits all assessment process where the actual operational history of the candidate, what they fly, where, and how often isn’t taken into account.

It is fair to say the medical risks involving associated stresses that could lead to the potential escalation of an underlying condition associated with a pilot operating a high speed turbo prop aircraft for many hours a year are very different to a pilot who operates a simple single-engined aircraft under the day VFR outside controlled airspace. Statistically such a pilot flies no more than 50 hours a year, in good weather, with a single passenger.

The NZ CAA saw fit to introduce a Recreational Pilots Licence (RPL) involving the medical certification standard, NZTA DL-9, required for the operation of a commercial motor vehicle – essentially a taxi driver’s medical. This is assessed by a general practitioner, authorised to issue this certification, who isn’t required to be told the assessment is for the operation of an aircraft. This removes any reticence on the part of the doctor that he’s making a judgement beyond his abilities. There is no involvement from the CAA medical branch.

The risks associated with the change in medical standard are mitigated by the operational restrictions imposed on the pilot.

Pilots holding a current NZ PPL(A) or NZ PPL (H) may apply for an RPL. All training is to the NZ-CAA syllabus for the PPL relevant to the aircraft type. A student may train for the issue of an RPL using a NZTA DL9.

Adopting this standard in Australia as a basic medical certification would go toward changing the one-size-fits-all approach currently practiced by CASA Avmed. Combined with AOPA’s other proposals it creates a graduated path to medical certification and allows as many pilots as possible the chance to continue to operate the aircraft of their choice, with little or no change to safety standards.